For about first four weeks, the dam does everything for the puppies. However, once the puppies are weaned, she stops cleaning their mess... 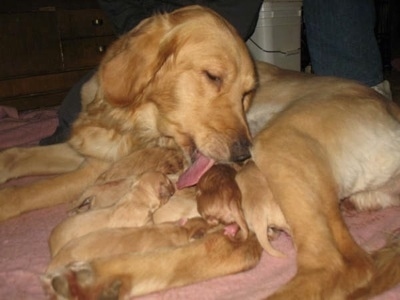 Ever watched a dam caring for her puppies, from the moment they are born till eight weeks? Many of you may not have had the pleasure of seeing that sight, which is why I thought of sharing my experience for your benefit.

The moment a puppy is delivered, the dam is extremely busy cleaning the pup, till the next one arrives. On an average there are six puppies in a litter of large breed, but at times even 12 are no exception. It is a real experience to watch her manage her brood. As long as she is awake, she keeps an eye on her brood like a hawk. From the actions of her puppies, she is able to make out what they want. A pup wanting to pee, gets a bit fidgety. Being still blind he cannot see around and he cannot yet walk on his legs, so he just crawls. The dam nudges him forward with her nose and then licks him from tail to front if it is a male pup, and a female pup gets licked from front towards the tale. This makes the pup complete the job and she lick the mess clean.

For about first four weeks, the dam does everything for the puppies. However, once the puppies are weaned, she stops cleaning their mess. From the smell of their stool or urine she can make out that they are now independent. The puppies, in the meantime, start walking around and explore. I will site a small incident here. Once I was watching the pups of a four-week-old litter play among themselves and their dam too was enjoying the sight. One of the puppies playing close to the fence of the kennel began to wriggle. Even before I could guess, the dam was up and tried to lick the puppy.

Meanwhile, he began to cry in pain. That attracted my attention, yet I could not make out the reason for the puppy’s cries. But a close inspection showed that one of the legs of the puppy had got stuck in the fence and it was trying to wriggle free. Meanwhile, the dam too attracted my attention by sniffing, licking the pup and whimpering. Once I extract his leg and let him free, the dam immediately pushed him close to her and licked the pup to sooth and to check if there were any injuries.

If you keenly observe your pup, gradually you will learn about your pet’s life. All you need to have is patience and observation skills. We have a spoken language. But dogs do not. They rather communicate through their actions or body language. These actions or behavioural patterns are connected with the wellbeing and health of the pup. There are certain instinctive actions that all pups perform. I will list here some and suggest corrective methods as well.

The most common behaviour is to chase anything moving. It may be a ball, a man cycling or a child running. The movement catches their attention and their hunting instinct tells them that this is a prey, which is trying to run away from me. Catch it and make a kill! In the process an innocent child gets bitten. To avoid an embarrassing situation like this, you must teach your dog to ‘Stay’ on command. And soon you will find that a split-second before pup begins to move, your sharp command ‘Stay’ makes him stay put. Praise him lavishly and soon he will know that chasing is bad.

Puppies start cutting their permanent teeth around four month’s age. The following four months in which the process is completed are one of the most difficult months for the owner and the pup. It is best to give him some toys to chew, like the teething rings of our children. Puppies are amenable to training. Once they are able to distinguish between a good and a bad deed, they avoid doing bad deeds. In other words, you must correct the pup before he mouths anything to chew. Dogs do not have a spoken language. They communicate via body language or sounds. The sounds that a pup produces may seem crazy like growling, barking, or whining. But each sound has some meaning. It is for you to observe and understand what the pup is trying to communicate!

Jumping on the pet parent or a visitor is sometimes quite annoying. But that is how they convey their excitement or happiness on seeing us after a long time or even upon seeing a visitor. There are many ways to correct this habit. Like ignoring the dog, or moving away or raise your knee with a jerk. The last method is slightly cruel as your knee hits him at the diaphragm and it may hurt him!

Many times, dogs develop so much attachment with a particular person that they start suffering with separation anxiety. Sometimes the anxiety is so much that the dog even stops eating food. Thus, from the very puppyhood he must be trained to develop attachment with all the family members and must be taught to live alone, if need be.

Dogs are expert beggars. They look at the master with such pleading eyes that he/she cannot restrain from giving a titbit off the table. This gradually leads to dog exploring the table top for leftover food. Many dogs are thus branded as thieves for no fault of theirs. I have seen even the stray dogs begging for food and people fall for those pleading eyes. Controlling this habit is not difficult. Dog should be kept away from the dining area, especially when you are having food or entertaining a guest.

Unlike our infants, puppies do not have fingers to explore the world. They do so by mouthing objects, which may be even your palm. This is often misconstrued as biting. Likewise, during the period of cutting teeth dogs may tend to bite anything. Some dogs turn vicious biters due to ignorance of their owners. Some dogs inherit viciousness through their genes. All such habits or traits need to be corrected instantly and in time. If you ask me, a lot can be learnt by observing how a dam cares for her litter. As explained earlier, she is an excellent observer and takes steps in time. Likewise, you have to observe your dog constantly, and teach him accordingly. If you do not follow these intricacies, then be prepared for a problem dog and be prepared to shell out lots of money to have your dog corrected by a professional. The choice is yours!

A beast is always the loser in man-animal conflict