It is pathetic to see a grand species like peafowl kept in small cages in zoos. Zoos should try to have free-ranging peafowl like in the Hyderabad and Delhi zoos... 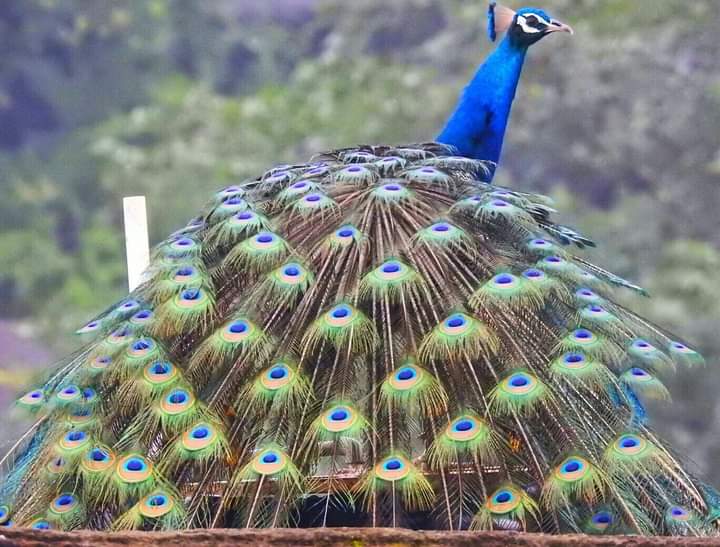 Few birds have captured our collective imagination as the peacock has. Kalidasa's “Meghadootam” has numerous references to this bird. It has inspired poets, painters, and artists through the ages. The peacock was declared the National Bird in 1963. But how well is it protected? Recently there have been increasing instances of farmers poisoning the birds for destroying their crops. Enormous bunches of peacock feathers are vended in our bazaars. What is the status enjoyed by this bird whose iridescent feathers spell sheer magic? Asad Rafi Rahmani, former director of the Bombay Natural History Society (BNHS), has a doctorate from the Aligarh Muslim University and has more than 40 years of experience in the field of Nature conservation and research. His field research includes numerous projects such as the Bustard Conservation Programme, Bird Community Studies of the Western Ghats, and Forest Owlet Project, and ongoing ones such as the Bird Areas Programme. His books include those on Common Birds of India, Birds of Wetlands and Grasslands, Important Bird Areas in India, and Ducks, Geese and Swans of India. His views on peafowl conservation etc., …

Q: How well-protected are peacocks in our country?

Peafowl is in Schedule I of the Indian Wildlife Protection Act. So, it has the same degree of protection as a Lion, Rhinoceros, Great Indian Bustard, etc. It is found almost all over the country from the Lower Himalayas to Kerala-Tamil Nadu and from Kutch to Arunachal Pradesh. Therefore, it is found in hundreds of protected areas and important bird areas. It is also revered in many temple towns and villages.

Q: Are they being slaughtered for their plumage?

Yes, and No. In areas where the bird is protected on religious grounds (a substantial part of India), only shed feathers are collected after the monsoon when breeding is over. But, in some tribal areas, they are killed for meat (Bustard in Madhya Pradesh, Nagaland, Manipur, Mizoram and Arunachal Pradesh). There are some reports of peacocks being killed for feathers by tribal people and the feathers sold to middlemen. Peacocks shed feathers every year. Substantial numbers are collected by villagers but as I said some could be coming from slaughtered birds.

Q: Farmers complain that peacocks destroy their crops and hence poison them in places (Tamil Nadu, for instance). What can be done to prevent the man-bird conflict?

It is true that peafowl can destroy newly-sown crops (seeds and seedlings) but this damage should be studied from area to area and a proper compensation model should be started to stop villagers from poisoning peafowl. Vigilance during and just after the sowing period should be increased to minimise the damage to seedlings. Once the crop grows, the damage is negligible.

Q: What can be done to increase the population of peafowl?

a) Strictly control peafowl feather trade and try to eliminate it altogether in a few years' time.

b) Start a peafowl crop damage compensation scheme in areas where the damage is substantial.

c) Control poaching by environment education programmes and involvement of local communities in North-East India, and in Central India among the tribal people.

d) Eliminate the use of pesticides, particularly those which impact the non-target species such as peafowl, doves and Sarus cranes.

e) Leave some natural areas in big urban gardens where peahen can breed and raise young ones.

f) Stray dogs and cats and even monkeys are a menace in some areas as they eat the eggs.

It varies from case to case. It is pathetic to see a grand species like peafowl kept in small cages in zoos. Zoos should try to have free-ranging peafowl like in the Hyderabad and Delhi zoos. Please do not start a peafowl captive breeding programme as was suggested by Chitbir Zoo in Chandigarh.

Q: Larger creatures (wildlife) such as the elephant and tiger are being given attention by the government, activists and the public. Do birds get the same attention, especially peacocks?

NO. It is a shame that our government gives attention only to glamorous species such as tiger and elephant (what I call Page-3 species) but no attention is given to the rest of the species, particularly birds. I call such neglected species BPL species (Below Protection Line species). Sometimes it looks like the MoEF is the Tiger Ministry of India and not the Ministry of Environment and Forests. This needs to change if we want to save India's wildlife.

Q: Is the habitat of peacocks declining rapidly? At one time they would even be sighted in the heart of Chennai, we hear…

For the breeding purpose, a peahen needs a secluded vegetated area. It makes a nest on the ground. In most of urban gardens, natural shrubs, herbs and grasses are cleared by the municipalities to “beautify the garden”. If we remove their breeding and roosting areas, even if we do not kill them, the peafowl population will die off as there will be no breeding/recruitment. In order to bring back the peafowl, we have to keep some areas of a garden/campus semi-wild where the birds can breed and raise their young ones. We also should start a feeding programme for peafowl wherever they are surviving.