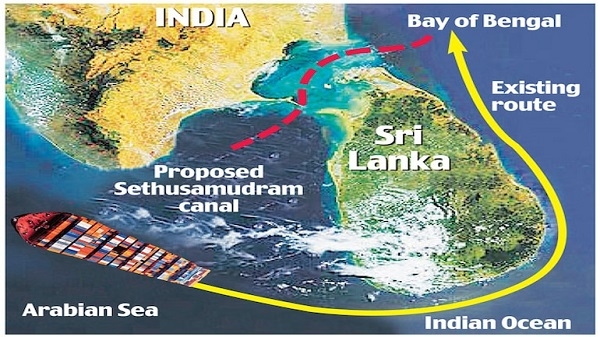 On November 10, the Supreme Court gave the Centre four weeks’ time to file a response clarifying its stand on a plea by former Rajya Sabha MP Subramanian Swamy, seeking national heritage status for the ‘Ram Setu’.

While the story of the controversial Sethusamudram Ship Channel Project (SSCP) can be traced back to the British, who proposed creating a channel to link the Palk Strait with the Gulf of Mannar, it was only in 2005 that the project was inaugurated. Separating the shallow sea consisting of the Gulf of Mannar in the south and Palk Bay in the north is a somewhat linear coral ridge called Adam’s Bridge or Ram Setu. This runs between Rameswaram in Tamil Nadu and Thalaimannar in Sri Lanka. The SSCP, if completed, is expected to considerably reduce the navigation time between the east and west coasts of India.

Concerns about the project

Though the CSIR-National Environmental Engineering Research Institute ruled out any serious environmental risk and certified the feasibility of the project, concerns have been raised about the stability of the proposed channel and its environmental impact. Computer models suggest that the central parts of Palk Bay and the parts located to its east and northeast may be impacted by waves of higher energy. This means that these areas also receive more sediment, rendering them more turbid. The models also indicate that waves enter the Bay from its north and south, corresponding to how the channel is aligned.

The area is also vulnerable to cyclonic storms. A cyclone in 1964 was so powerful that it wiped out the town of Dhanushkodi. Such storms can cause the local sedimentary dynamics to go haywire. Finding safe places for dumping dredged material without harming terrestrial or marine ecosystems is, therefore, a big challenge. Emissions from ships traversing the narrow channel will pollute the air and water. And if a rogue ship carrying oil or coal is grounded or strays from its course within the canal, it may cause an ecological disaster. While environmental groups have been protesting the project for the huge environmental cost it would entail, religious groups have been opposing it as they believe that the structure, which is mentioned in the Ramayana, is of religious significance.

In 2003, space-based investigations, using satellite remote sensing imagery, by researchers at the Space Applications Centre in Ahmedabad concluded that Ram Setu was not man-made “but comprises 103 small patch reefs lying in a linear pattern with reef crest, sand cays and intermittent deep channels”. Cays, also known as keys, refer to low-elevation islands situated on surfaces made of coral reefs. Thus, it is reasonable to assume that Ram Setu is a linear ridge made of coral reefs and forms a shallow part of the ocean that is constantly impacted by sedimentation processes. Like the Great Barrier Reef, the Ram Setu is also a continuous stretch of limestone shoals that runs from Pamban Island near Rameswaram to Mannar Island on the northern coast of Sri Lanka.

During a global glaciation period that began around 2.6 million years ago and ended 11,700 years ago, the Indian coast, including parts of the Sethusamudram, may have been raised above water. The post-glaciation period witnessed a steady rise in sea levels around the world. The coral polyps could once again have grown higher on the newly submerged platforms and in time, the platforms may have been used by migrants to cross oceans. The Ramayana refers to a putative land bridge in this region; believers hold it as the structure that Lord Rama and his army built to reach Lanka. This ridge may have been used in the distant past as a migratory route.

The coral reef platforms between Thoothukudi and Rameswaram in the Gulf of Mannar were notified as a marine biosphere reserve in 1989. More than 36,000 species of flora and fauna reportedly live there, flanked by mangroves and sandy shores which are considered conducive for turtles to nest. This is also a breeding ground for fish, lobsters, shrimps, and crabs. Of the 600 recorded varieties of fish in the region, 70 are said to be commercially important. This area is already threatened by discharge from thermal plants, brine run-off from salt pans, and illegal mining of corals. The SSCP, if it becomes a reality, will be the final blow to this sensitive environment and to the livelihood of the people there.

While considering this issue from a believer’s point of view, it is also important to consider this feature from a ‘geo-heritage’ perspective. The geo-heritage paradigm is used in nature conservation to preserve the natural diversity of significant geological features. It accepts the fact that geo-diversity, consisting of varied landforms and features representative of dynamical natural processes, is under threat from human activities and needs protection. The natural heritage of a country includes its geological heritage. The value of abiotic factors like geology, soils, and landforms is also recognised for their roles in supporting habitats for biodiversity. India’s ‘tryst with destiny’ does not begin at Harappa or the Vedic Period; it goes back billions of years when the Indian tectonic plate moved thousands of kilometres from the south of the equator to its present location. The Ram Setu carries the unique geological imprints of an eventful past. Therefore, it needs to be preserved not just as a national heritage monument, but also as a geo-heritage structure as defined from a scientific perspective.