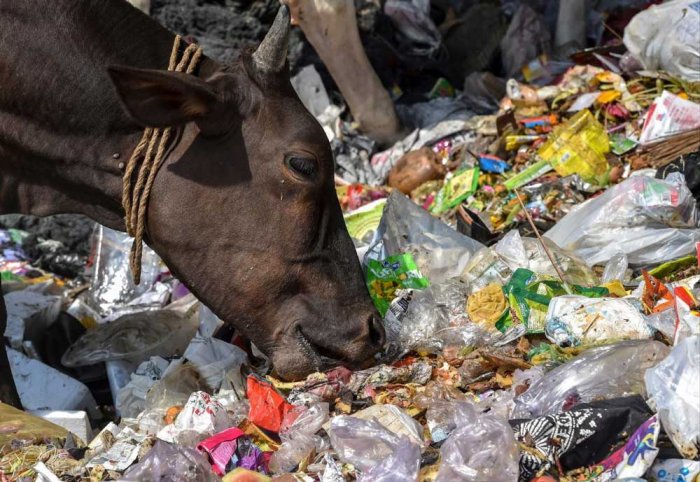 We asked: The rising cattle menace on road is not only a threat to the citizens but also belies the religious sentiments shown in the ‘holy Cow’! You can find the cows eating filth and getting injured by the vehicles. Is this really ‘Gau Mata’ protection? Do you think that the government must re-enforce the law that shifts all ‘goshalas’ outside city limits and discourages people from keeping cows for vested interests in limited spaces and letting them loose to graze on urban waste?

There was always this bond–the first roti was always kept aside for a cow. Today the holy cow has become a holy terror leading to much unrest, violence and vigilantism. Large populations of abandoned cattle are roaming around on the city streets or housed in cattle-shelters with inadequacy of space, infrastructure, financial and veterinarian support. The problem of stray cattle, wandering into fields, attacking children or older people on the roads and sometimes themselves dying and rotting on the street is a frequent occurrence. In UP, several instances of people locking up stray cows and bulls in schools and hospital buildings have been reported. The primary cause for the menace in urban area is the presence of several illegal dairies in many parts of the city from where the cows are let loose to graze all over the town. Ectoparasitism, mainly lice and ticks infestations, persist due to unhygienic conditions besides other bacterial and viral infections in these animals which can then be easily transferred on to household pets when the cattle is let loose in residential colonies  for grazing besides them being a source of potential danger to people and traffic on the city roads and highways. ‘Holy’ cows battle stray dogs and pigs at garbage dumps and eat filth, toxic substances and plastic waste which cause serious injuries to their vital organs Accidents caused by stray cattle are galore in which people get seriously injured or killed but what has gone unnoticed is that the strays get killed and injured too. It is a common sight to see stray cows and bulls, with their bones and ribs sticking out, limping on three feet, fighting among themselves and attacking whoever dares to come in-between on our busy roads creating havoc for pedestrians and vehicle riders both. We as onlookers do nothing except may be thrash them severely for no fault of their own! Cows suffer and feel pain too when they are abused. It’s amazing to see that we, despite being a highly religious people, only pay lip service to the protection of cows. It becomes all the more heart wrenching because according to research, cows are generally quite intelligent animals who can remember things for a long time. Animal behaviorists have found that they interact in socially complex ways, developing friendships over time and sometimes holding grudges against other cows that treat them badly. These gentle giants mourn the deaths of and even separation from those they love, sometimes shedding tears over their loss. The mother-calf bond is particularly strong, and there are countless reports of mother cows who continue to call and search frantically for their babies after the calves have been taken away. Manjul Pande Parvez, retired lecturer

The urban areas within the municipal limits are limited and every space is earmarked for a particular purpose such as residential area market area office area work place institutional area educational area service area parks and roads to name a few. The agriculture and animal husbandry which require free and vast spaces is the field of rural areas and are almost beyond the scope of urban areas .If anyhow some people thanks to their vested interests press for animal husbandry like cows for milk business they become menace to themselves as well as to the citizens. They require meadows for grazing and free way for going to and coming from the grasslands both of which are not available for them so the system of urban life becomes jeopardised. Vehicles hit animals and animals hit civilians Animals are bound to eat filth plastic and other injurious substances which ultimately become threat to their lives Civilians are also not safe. So it is very necessary in the interest of cattle and the civilians to shift the Goshalas out of the municipal limits. VP Srivastava, retired government official

Topic of the month: Do you think it is fine for corporators to get water tanks installed at just about everywhere in their respective areas that make groundwater so readily available for public misuse? You may send your views in 200 words at [email protected] Please also attach a colour photo of yourself.