I spotted birds, langoors and other animals through this forest trail. On the return journey, I took the route through Kolar Dam built on Kolar river- a tributary of the Narmada... 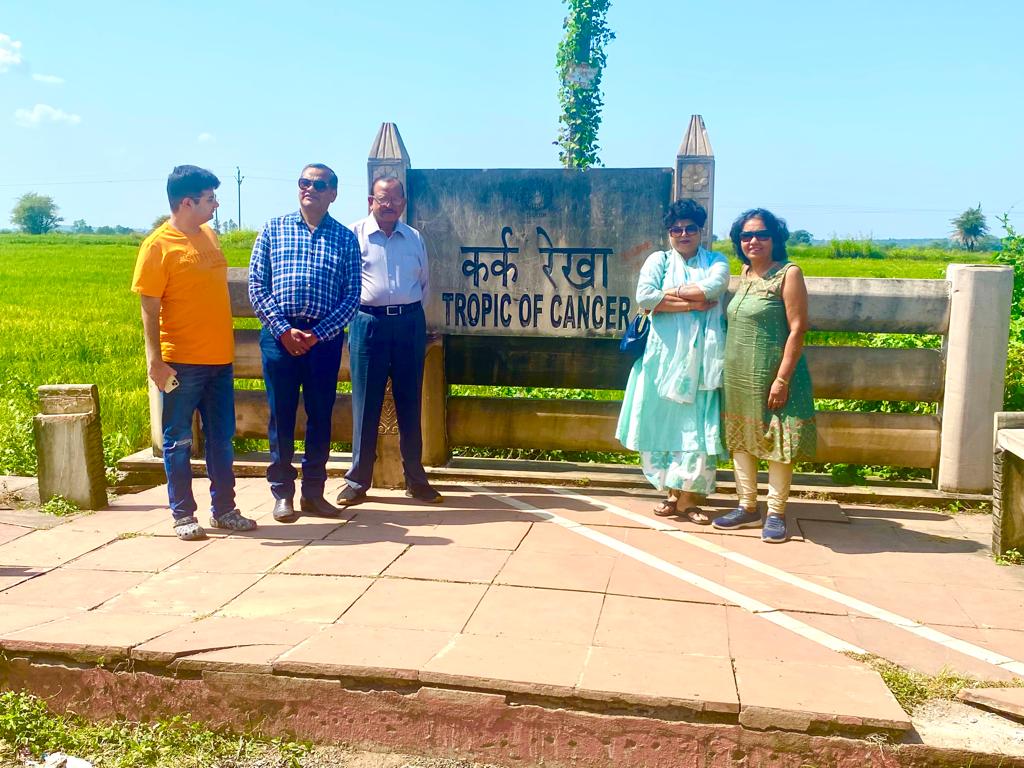 Recently I had the opportunity to travel to the city of Bhopal which is the capital of Madhya Pradesh. I am an avid traveller and have travelled to most of the states and their prominent cities but never to Bhopal. As I was about to travel to Bhopal, almost everybody I met sang paeans of its beauty. Yet nothing prepared me for the beauty that I witnessed on landing in Bhopal. I have not been able to get over this visit for various reasons.

I took a flight from Delhi to Bhopal and landed at Raja Bhoj International Airport from where I took a taxi to my hotel in the city. As I drove into the city from the airport via the four-lane VIP Road the sights of the city took my breath away.  The city looked dreamy, nestled in rocky terrain. It had uneven elevation due to small hills within the city boundaries. As I drove through the city, its winding road took me through the hillocks that appeared to be peeping from behind the lush green liveries of dense forest cover. And suddenly, from behind the hillock, emerged a massive and magnificent unending expanse of water. The glittering waters of the lake reflecting the streetlights and other city lights held me captive. I was mesmerized by the beauty of the place. I had not yet taken in the beauty of this lake when another appeared to seduce me with its beauty. In this state of heady intoxication, I reached my hotel.

The place was comfortable, the food excellent and the staff courteous. I discovered that the city had a large number of hotels- both in budget and luxury categories. Travelling in the city was facilitated by public transport as well as taxi service, app-based as well as private ones. The city boasted famous eateries selling local and international cuisine. The city also boasted a large number of authentic local cuisine too.

I was lucky to be travelling in the festive season of Shardey Navratri and Dussehra. The city wore a festive look with beautiful Maa Durga pandal and jhanki at every corner with kirtans blaring out of loudspeakers throughout the day and evening arti being performed, and bhandara (mass meals) being organised on Ashtami and Navmi. On Navmi, I spotted processions of women in their traditional fineries, carrying bhujariya, which is wheat grass for immersion. Hi-tec garba pandals played foot-tapping musing as a part of Navratri celebrations. I spied these pandals and savoured their beauty and festivity from a distance.

The city of Bhopal is a tourist’s paradise! My itinerary for the city sightseeing was drawn up: I began the day with a visit to the Van Vihar National park and zoo. It was a morning well spent. I saw the wildlife, nature, hills and lake all in one place. A quiet, serene environment is suitable for birdwatching too. So, come prepared with proper attire and necessary equipment for optimum enjoyment. My only regret was that I should have hired a car to see the Zoo. A sudden drizzle played a spoilsport.

I chose to visit the amazing, almost 40-km-long, manmade 11th-century freshwater lake, supposedly created from 365 tributaries–Upper Lake or the Bhojtaal, named after its creator - the Parmar King Raja Bhoj. I engaged a taxi and drove around the Bhojtaal taking in the invigorating evening breeze and the visuals of the city. I stopped at a boat club that was bustling with energy and gaiety. Charged groups of people in festive mood thronged the boat club and the adjacent eateries and the memorabilia shops. The place afforded good facilities for seeing the city by boat. There were paddle boats, motor boats, rowing boats and even cruises for parties. I moved the promenade by the lake to savour its beauty in solitude. In the vicinity was another lake segregated from the Upper Lake by an over bridge. It was called Lower Lake and was 6 sq. km. It was created 200 years ago by Chhote Khan. The numerous wells in the area were merged at the time of the construction of the lake. From the promenade of these lakes from antiquity, I watched the city turn into a silhouette at sunset. After the satiation of the soul, it was time for satiation of the stomach so I buzzed off to the market to enjoy the local cuisine. The kulfi with faluda at Manohar’s was the perfect close to a beautiful day.

The visit to this museum was informative as well as fascinating. It exhibited tribal houses and their elaborate interiors. Since it is an open museum, it was a novel experience.

Next on my itinerary was a visit to Bharat Bhavan, the cultural centre of national repute. It housed an art gallery, an amphitheatre, and a tribal museum. I was an extremely unique museum and not to be missed. Thereafter, during a city tour in my taxi, I saw important monuments from outside like Taj-ul-masjid, Jama Masjid, Moti Masjid, Shaukat Mahal and Sadarmanzil, Regional Science centre,  and the aquarium.

It was Shardey Ashtami the next day. I woke to the chants of Durga bhajans on loudspeakers. I started early morning for the darshan of Vindhyawasini Beejasan Devi- an incarnation of goddess Durga- situated on an 800-foot-high hillock in Salkanpur, about 70 km from Bhopal, in Sepore district. It is a Shaktipeeth. I drove to the temple though one can climb either 1000 steps or take a ropeway too. The temple was thronged by hordes of devotees during Navratri resulting in serpentine queues and a long wait for darshan. The drive to the Shaktipeeth was through a picturesque, dense teak forest called Ratapani Abhyaran. It was full of seasonal rivulets and beautiful small ponds, where I stopped and spent some time. I spotted birds, langoors and other animals through this forest trail. On the return journey, I took the route through the Kolar Dam built on Kolar river- a tributary of the Narmada. The area around the dam was verdant and popular amongst picnickers. On the way, I came across Jhiri tiger safari and waterfall. There was a Mahadev temple as well. There are about a dozen big and small dams around Bhopal where one can go on a day trip. All these places are patronised by locals as either picnic spots or weekend getaways. After the day’s trip, I called it a day!

I started early in the morning to visit Bhojeshwar Temple in  Bhojpur. Attributed to Raja Bhoj, it is an incomplete temple from the the11th century, the construction of which was abandoned. The people of the neighbouring villages still worship the Lingam which is 7.5 feet tall. The temple has been designated as a Monument of National Importance by the ASI.

From the temple, I drove to Bhimbetka rock shelters. A trail through the craggy rocks and dense forest led to these pre-historic sites containing caves and rock shelters made of quartzite sand rocks, replete with cave paintings. It is a UNESCO world heritage site. I was awed by the antiquity of the caves and the elaborate paintings, often overlapping various eras. Treading the same paths that the prehistoric people treaded was extremely thrilling.

Next on my itinerary were Udaigiri caves, the mountain of sunrise, which was about 90 minute drive from Bhopal. These were rock-cut caves near Vidisha. Fascinating 20 rock-cut caves were from Hindu and Jain Pantheons. Another name of the place is Vishnu Padgiri – that is Feet of Vishnu. They belong to the 5th century CE. I had to buy a ticket to be able to gain entrance. There were guides available who explained the history, style and meaning of the inscriptions. The site is ASI Protected site.

On the way to Sanchi there was an MP Tourism Guesthouse / Hotel that served sumptuous meals at reasonable rates. It was clean and furnished with all the necessary amenities. I broke my journey here. It offered accommodation and ran laser shows for guests starting at 6 pm. I drove to Sanchi. Here too I bought a ticket and engaged an ASI-approved guide who gave us an insight into the finer details of architecture and enlightened me by decoding the meaning of carvings on each of the gates of Sanchi Stupa. This is again a UNESCO world heritage site.

Here’s why should you groom your dog

‘We have no Planet B’