We didn’t ever buy crackers on Diwali out of consideration for him. However, he was always excited during Holi, maybe because of all sweets that he also ate... 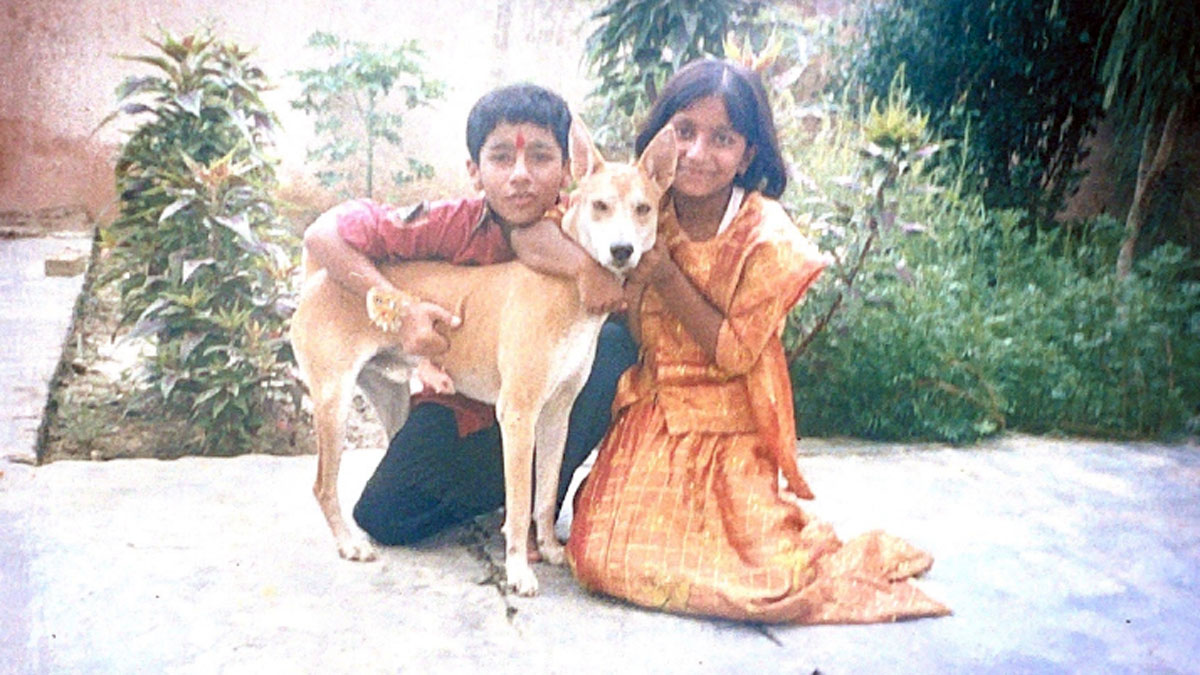 Sheru was only five days old, measuring no more than half a foot when he first came to our house. He was from a litter delivered in a nearby nursery by a crossbred German Shepherd. Initially, it took us a great deal of care and attention to tend to Sheru. He was so small that he used to hide and sleep in tiny spaces. We still recall the incident when he had slept in my father's shoe and once in a crevice at the base of a brick heap on the terrace.

Taking care of Sheru was equally divided among us family members-my sister, parents, and myself. His morning walk was ascribed to me and Sheru used to come and poke me with his nose in the morning to signal it was time! Evening walks were undertaken by mom. In fact, most of his chores were undertaken by mom- feeding, administering medicines, and cleaning his wounds when he was hurt; he trusted her the most. The younger sister would only play with him, pet him and occasionally feed him milk from her own mug. We used to bathe him daily, twice in the summers. My maternal uncle being a vet, we had a regular supply of shampoos and oral health supplements for him. The mere discussion of bathing Sheru was enough to send him hiding under the bed. His bathing events were a daily struggle for him and for us. We used to play with him a lot. We did not have a lot of toys-only Sheru. Applying makeup and nail paint, mostly when he was asleep; enticing him with sweets when he refused to accompany us; making him come up to our bed and cuddling him, or just running after him when he dug in the garden feverishly with his front paws with mud strewn all over him and his nose-these were our mainstays. Once when he was ill, we made him drink a little brandy and he slept for two days straight, eating a lot upon waking up. He used to be a part of all the prayers, numerous trips, and festivals. We used to include his name in the prayers chanted by the priest during yajnas at home. We didn’t ever buy crackers on Diwali out of consideration for him. However, he was always excited during Holi, maybe because of all sweets that he also ate.

He used to chase away monkeys and birds from the kitchen garden and mice and cats from the home. He was indifferent to cats in the beginning but started chasing them once he spotted one gorging on his food! His vet visits for vaccination were an ordeal for all. He used to turn the hospital upside down, scampering in all directions, obliging only after an hour or so after tiring most of the hospital staff. Once we called a vet to our home for vaccination. After that Sheru used to growl and bark at him whenever he passed by our door. We stopped this exercise altogether after four or so visits. However, all stories have to end somewhere. One fine evening, while digging a hole in the garden-his favourite pastime-something snapped inside him and he departed the next day. He was 12. He was buried with all the rituals. When he came to our home, little did we know that he would depart one day like that leaving behind just his memories. We miss you, Sheru!