The concept of this Durga Pujo has been very different. Even the Kolkata Police dog squad members visited this pandal as special guests... 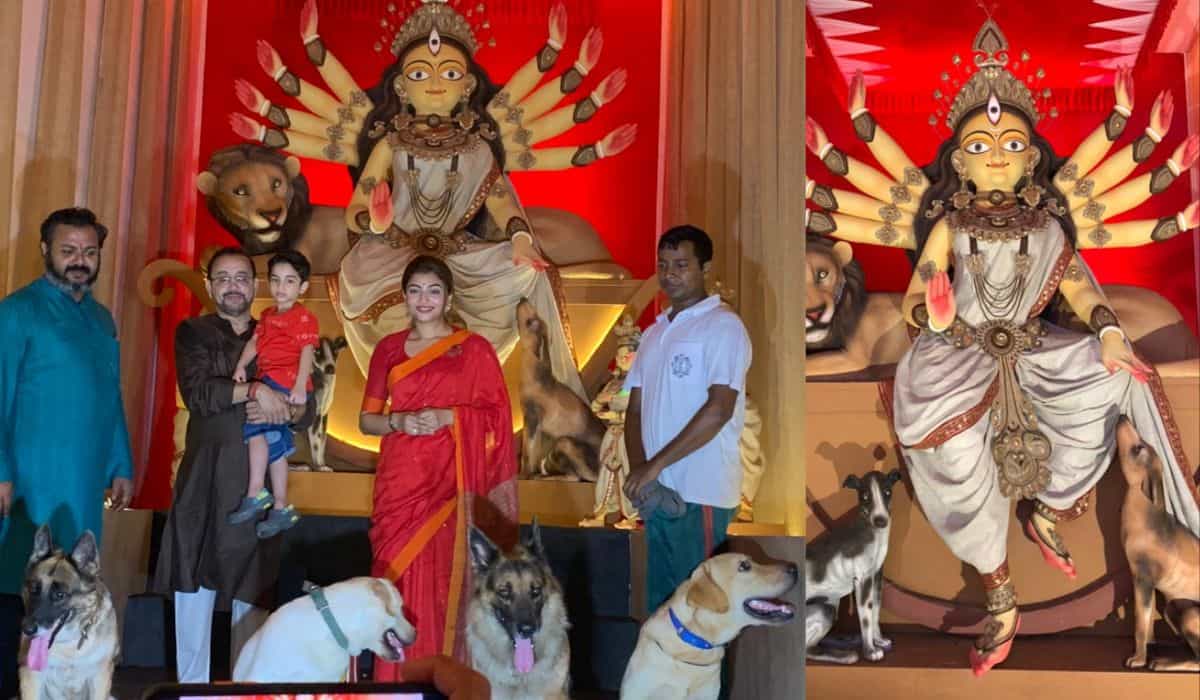 This time Kolkata has gone ahead and done something never done before- made its Durga puja pandals pet-friendly! Kolkata was decked up for Maa Durga as one of the biggest festivals for Bengalis started. Several pandals displaying various unique art forms were constructed in different parts of the city. However, one particular puja pandal grabbed maximum attention for giving a special nod to the furry residents of the city.

As one entered the Durga Puja Pandal of Atlas Club in Shyambazar, he sensed a different feeling altogether. There were people visiting this pandal with their pets. The pandal depicted love for pets. Here, two dogs were seen sitting beneath Maa Durga’s idol seeking protection. Speaking to us, Sourish Bhattacharya, cultural secretary of the club, said: “See, the way people still treat street dogs is bad, Moreover, dog lovers have to face problems in various places. People who take their pets to various places face humiliation and rejection. But not here. Here pets have come to Maa Durga, seeking protection. Here asur (demon) is in the format of those people who disturb street dogs and other animals.” Not only that, but this pandal also depicted how, from time immemorial, saints have loved pets and animals. The concept of this Durga Pujo has been very different. Even the Kolkata Police dog squad members visited this pandal as special guests.

The Kolkata Police had tweeted on September 26, 2022: “Paw Stars! Yesterday, four members of our Dog Squad - Labradors Molly & Camphor, German Shepherds Liza and Dinky - made a very special appearance as chief guests at the inauguration of Kolkata’s first pet-friendly Durga Puja, courtesy Bidhan Sarani Atlas Club. Sharing a few glimpses." “Molly, Camphor, and Liza, all came and they performed in front of Maa Durga," said Sourish Bhattacharya, cultural secretary of the club. M Mitra, who came to this Pandal with a pet, told us: “It’s a great opportunity for us, as it really becomes difficult to take our pets anywhere. Today it is also pandal hopping for them. We are thankful to these organisers.” Not only this but one Labrador from Rajasthan had also visited this Pandal. In fact, the club made an appeal to all pet parents “Please note that our initiative of first-ever pet-friendly Puja in Kolkata is for every kind of pet and not only dogs”.

Then, there is the Behala Club Durga Puja which also had a pet-friendly pandal where pet owners could catch a glimpse of the deity along with their pets. However, the Bidhan Sarani Atlas Club in Shyambazar area of Kolkata made its theme stray dogs and indie breeds. The idea for Bidhan Sarani Puja came to be after artist Sayak Raj learned that a Badrinath-Kedarnath Temple Committee had filed an FIR against a Noida resident for hurting religious sentiments. A video of the Noida resident’s Husky touching an idol’s feet at the temple went viral on social media. Raj said: “Kedarnath is a shrine of the deity Shiva, who is also referred to as Pashupatinath or lord of the animals. And yet, there was such a controversy over a dog visiting the temple.”

The pet-friendly pandal was open exclusively for pet owners for a three-day period. For the rest of the days, the organisers had given a helpline number on which pet owners could inform them in advance of their visit, and the pandal made special arrangements. Pets could enter through a special entry gate accompanied by one person. The Behali Club’s Sayantan Bhattacharjee said: “Our reason for opening our pandal to pets was to make sure that the entire family, pets included, could be a part of the celebrations.”

The Lucknow Municipal Corporation is mulling over a proposal to allow a household to keep only two dogs at a time, a move aimed at regulating the population of the animal in the city. The civic body is also looking into a proposal to increase the license fee for dogs. The proposals are being discussed in the wake of dig-bite cases in the city. On July 12, an elderly woman was mauled by her pet dog. In April, a five-year-old boy was killed while his six-year-old sister was badly injured when stray dogs attacked them. Dr Arvind Rao, Director, Animal Welfare, Lucknow Municipal Corporation, said: "We are in the process of making new guidelines for pets, especially dogs. Proposals for doubling the license fee along with other aspects of animal management are part of it." Rao said in proposed new guidelines, dog owners cannot leave their dogs unattended in public places. They will have to ensure that their dogs do not create trouble for people living in the neighbourhood. The renewal of the license would be mandatory every year besides adhering to the required vaccine regimen, he said. Currently, the civic body takes Rs 500 to issue a license for foreign breeds. This fee will become Rs 1,000 on the implementation of the new guidelines. Stressing the need for stricter guidelines, Rao said: "As living spaces in the city are reducing, it becomes necessary that we take measures to ensure that no conflict occurs due to pet animals." "The new guidelines are being made keeping in mind the demand of the present time. The well-being of pets is also being considered in the new guidelines," he added. As per the new guidelines, a dog owner will have to ensure that the space where the animal lives is clean and comfortable. Considering that several people keep such dogs that are known for their ferocious nature and even banned in several countries, the civic body is planning to ensure that they are properly trained. "Some dogs require to be trained properly before being kept as a pet in houses. We are trying to include this aspect and make it mandatory for pet owners in the city," said Rao. "Our plan is also to make pet owners aware of the dangers of keeping dogs of such breeds," he added. The Municipal Corporation is also focusing on checking the population of stray dogs in the city. Several cases of dogs attacking children were reported recently. Following the attacks, the civic body issued a helpline and focused on animal birth control. The Municipal Corporation claims to tackle the issue of man-animal conflict in a scientific manner. As per officials, they used to spay or neuter an average of 60 stray dogs in a day, which has increased to around 120 dogs per day. The civic body has also issued a dedicated helpline for residents in case of stray dog-related emergencies. Residents can use the helpline to report incidents related to dog bites and the stray dog population. To prevent any cruelty towards dogs, Rao said they were in touch with representatives of several animal rights groups and worked closely with them to mitigate any possibility of dispute in carrying out population control measures.