Earlier it was thought that dogs learn with association of ideas and repetition. However, Emily E. Bray a psychologist carried out behaviour of dogs by conducting experiments on more than 300 pure bred dogs and found that dogs are biologically prepared for communication with humans. 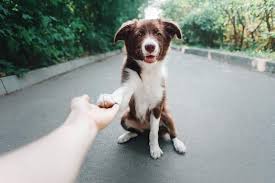 An eight weeks old puppy still with his littermates and dam has hardly any interaction with human beings. You bring home one of the pups and put him down on the floor. After he has sniffed around, place a treat at a place which is accessible, yet he can’t see it. The treat should have a lucrative smell for him. He will certainly sniff and try to find, but he won’t be able to locate. But if you point your finger and tell him ‘there’, he will immediately understand your signal and reach his goal.

How does this happen? How does he know that your finger is showing the direction in which he has to go? Try the same option with a cow or a goat or even a rabbit. What will happen? Nothing, they will remain dumb. Now imagine another situation. The puppy has located the treat, which is out of his reach, due to a barrier in-between. He will first try to reach it, then bark or cry, looking at the objective. But all of a sudden, he will look at your face, expecting a help. If you look back at him with all the anger in your eyes, he will turn his face away, may slink back to a corner or may remain there hoping for a miracle! However, at the time when he looked at you, if you give an expression of joy and happiness, he will look again. If he is around 12 weeks old, he will come rushing towards you. At 16 weeks, he will come to you and rush back and start digging there. At one year he will tug at you, try to drag you to the spot. Can you imagine the same response from any other pet? I tried with my fish. I found that Gold Fish in an aquarium respond by assembling at a spot when I approach them to feed at a particular time. At other times they dot even look at me. But at the time of feed if I ignore them and walk past, they too forget about the food and get back to their normal activities.

Earlier it was thought that dogs learn with association of ideas and repetition. However, Emily E. Bray a psychologist carried out behaviour of dogs by conducting experiments on more than 300 pure bred dogs and found that dogs are biologically prepared for communication with humans. In other words, they are programmed in such a way that they know that their existence depends on humans only. Other animals like cows, buffaloes etc. also live with humans but their response is at best a grunt. Of course when they are hungry, they may give a call. Since they are grazing animals and never sleep in their own lair or in the bedroom of their master, they defecate while grazing.

In our country, dogs are used for various security purposes in addition to being a pet, but as far as I know they are not used for helping patients in the hospitals to recover from trauma or in the institutions where mentally challenged kids are kept. But in the US, they are extensively used for this purpose too. While working for such people, a dog has to be docile, respond to caress and even cuddle with the patient. And never show any kind of aggression. Not even a growl. Such dogs are certainly trained for this purpose, but they are selected with great care. There is a reason behind that. Apart from the dog’s aggression, at times the patient too can be aggressive or shriek all of a sudden. The dog has to remain quiet under all circumstances. For such purpose usually the quietest breeds like Labrador retriever or Golden retriever are selected. Among these breeds too, due to wrong breeding, many times aggressive specimen are produced. Thus the tests which prove surely that this puppy will grow in to a quiet individual and he can be perfectly trained are performed. Naturally, a puppy which depends more on the humans are preferred.

Some of the tests the animal behaviour experts performed are worth knowing. Out of the selected eight week old puppies of the breeds mentioned some were placed in a room where six paper cups of same size and shape were placed upside down. A coloured plastic cube was placed in front of the cup containing the treat. The puppies were let go one by one and around 70 percent puppies could establish the link between the plastic cube and the cup with treat. Another set of puppies was taken to adjacent room where similar cups were placed with no cube to guide them. Majority of them could not locate the treat. A few with greater power of smell could locate the right cup. However, it was found that when a finger was pointed towards the cups, they rushed to it and located the treat. Who gave them the idea that the human finger is pointing towards their goal? The puppies being experimented had hardly any contact with human beings! Yet they understood the signal of the finger.

Puppies and even adult dogs watch your face very carefully and minutely. They can make out what is going on in your mind. This evening I met a lady in my society and her five-month-old Husky puppy. Though it was a puppy, it was very well built. He was dragging his mistress like a sledge. Though she was using a choke chain, I could make out that she was a novice. I could also make out that the puppy was very friendly type. They generally are. She agreed to my request and I showed her how to use the choke collar and how to walk the dog. I walked him a few paces and like an angel he walked besides me comfortably. Before handing him over, I patted the dog, scratched his chin and our eyes met. His eyes seemed to say, ‘thanks for the gentle walk!’ He read the compassion in my eye, the moment we met.

This is just an example of how observant the dogs are. With their 180 degrees vision, they can see much beyond what we can commonly notice. The behavioural psychologists with the genetic scientists are decoding many things about dog behaviour, especially in the company of humans. As of now their studies are based on pure bred dogs. Wish the behavioural psychologists in India, with the help of Genetic scientists could decode the gene pool of street dogs! They have been given a freedom to roam in any urban settlement. But unfortunately they are not being utilised. By that I don’t mean that you make them Circus animals. What I am trying to convey is that they could be trained to guard the human settlements against robbers and burglars. Those found fit can be a big asset to the Police department.

Generalist birds that feed on urban trash under threat

Frequent deworming can be injurious to pets