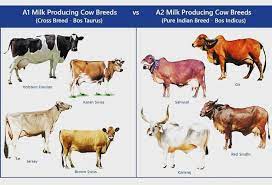 A tall glass of milk is the best health drink most of us want to consume first thing in the morning. Add a little turmeric and the white delight turns into a medicinal drink to rid you of all pains. Milk is the main source of calcium and protein for us. Several other elements are also found in the milk like lactose, fat, other vitamins and minerals. But is every type of milk the same health-wise? Do you know that milk contains two types of proteins: whey protein and casein protein? There are two types of casein protein: alpha-casein and beta-casein. The largest group of proteins found in milk is of casein only, which is 80% of total protein. If we talk about, beta-casein, it is also found in two forms: A1 and A2.

Cows producing A2 milk are known as A2 cows while those producing A1 milk are called A1 cows. Since long back, cows have been producing A2 milk which is regarded as safe and nutritious. Production of A1 or A2 milk by cows is governed by beta casein gene which is located on chromosome number 6. Around five thousand years back beta-casein gene was mutated and 67th amino acid was changed from proline (A2 allele) to histidine (A1 allele). If β contains the CCT codon encoding the proline found at the 67th position of the casein chain and when the gene in this locus contains the CAT code encoding the histidine instead of the CCT code from A2 allele, then the A1 allele of the gene is mentioned. Accordingly, individuals with A1A1 geno-type produce A1 milk, in other words histidine occurs at 67th position of β casein. Individuals with A1A2 genotypes produce both A1 milk” that is, milk with “histidine” and β casein, as well as A2, in other words, milk with “proline” and β casein. Briefly, the milk produced by A2A2 genotype animals is called A2 milk namely ‘original milk’. The recent emergence of several A2 milk players in India is an indication of consumers’ willingness to pay a premium for perceived better quality and safer milk.

A1 protein is a natural mutation of A2 which occurred over 1,000 years ago and on its digestion, A1 protein produces beta-casomorphin-7 (BCM-7). BCM 7 is an opioid peptide. It is a small protein that does not digest in our body. This can lead to indigestion and many types of research have shown that it may lead to various other problems or diseases like diabetes etc. So, we can say that proline amino acid in A2 milk prevents BCM 7 from going into our body. But A1 cows do not make proline, so, BCM 7 goes into our body and later it dissolves in the blood. According to the report of the US National Library of Medicine National Institutes of Health, in A1 beta-casein milk high amounts of BCM 7 is found. If it is given to the children, then the problem of diabetes will increase in them. This research was done in Scandinavian and the Netherland countries. Here, it is found that a large number of people are suffering from diabetes. For this, lifestyle may also be one of the reasons but somewhere A1 milk is also connected with the disease. Even, Heart disease has also been linked to some extent with this milk. According to some Russian researchers, the BCM 7 passes into the children’s blood and also retards the development of the brain. This research was published in the International Journal ‘Peptides’. According to another report, Indian Journal of Endocrinology and Metabolism 2012, diabetes type 1 has some connection with A1 milk and in addition heart problem, mental disorder, autism, prevention of allergic deficiencies, and schizophrenia because of BCM 7 as it goes to the blood and then to the brain.

Despite reports implicating A1 protein/BCM-7 in negative health effects like Ischaemic heart disease, Type 1 diabetes, autism, inflammatory response and digestive discomfort etc, the scientific community believes the evidence is insufficient and inconclusive. In fact European Food Safety Authority (EFSA) in 2009 did not find “cause and effect” relationship between BCM-7 and the reported non-communicable diseases. Since 2009, more research was done on gastrointestinal effects of A1 and BCM-7. The overall evidence for gastrointestinal effects from A1 and BCM-7 in animal and in vitro studies is conclusive, but the evidence from human studies is still limited. Moreover, symptoms of digestive discomfort are also associated with lactose intolerance, wherein an individual is not able to digest lactose due to a deficiency in the lactase enzyme. Lactose intolerance, which is associated with milk sugar lactose, is different from allergy to a milk protein, though some of the symptoms may be same. Lactose is present in both A1 milk and A2 milk and consumers should be aware that shifting to A2 milk will not help them address lactose intolerance.

Indian native breeds of cows and buffaloes are of A2 milk type and hence are a source for safe milk. A1 cows are most commonly found in India and outside countries also. They are also known as hybrid cows. In the year 1970, the National Dairy Development Board had introduced Operation Flood in India, in order to deal with the lack of milk due to the increase in population in India. The main objective of this project was to increase the production of milk, promote rural production and provide reasonable value to the consumers. The cross-breeding method was used with the import of foreign hybrid species and European species for this purpose. Due to which shortage of domestic cow’s occurred in India.

Studies by the National Bureau of Animal Genetic Resources (NBAGR), Karnal covering 22 desi breeds have established that predominant genotype in India’s native cattle is A2A2, confirming that our indigenous cows and buffaloes produce A2 milk. The frequency of A2 allele was 100 per cent in the five high-yielding milk breeds — Red Sindhi, Gir, Rathi, Shahiwal and Tharparkar, meaning that these breeds do not have A1 allele or A1A1/A1A2 genotype. In the remaining breeds, the availability of A2 allele was 94 per cent. NBAGR also reported moderate to high frequency of A2 allele among the breeding bulls, further supporting the belief that milk being sold in India is safe for human consumption. Comparatively, in exotic breeds like Jersey and Holstein Friesian, the availability of A2 allele is very low.

Considering the widespread use of exotic types in Indian cross-breeding programmes and the fact that these exotic breeds are source for A1 allele, there is need for caution in future breeding activities to ensure that A1 allele does not get fixed in Indian cattle breeds. NBAGR is currently implementing a project entitled “Delineating Beta Casein Variants in Indian Cows and Potential Health Implications of A1A2 Milk”. The bureau is also offering a service for genotyping of A1/A2 allele from milk or blood samples in cattle species at nominal cost. Private companies in India have also ventured into this by offering allele detection kits. The government is also taking steps to conserve native breeds of every region and private players can also play an important collaborative role in these efforts. Private dairies could also work on improving the productivity of desi breeds (which have low productivity) by better breeding, better farm and feed management and better animal health. There is huge potential for enterprising dairy units to take advantage of indigenous buffalo milk and cater to the growing demand of A2 milk and A2 milk based value-added products in the international market.

Despite the lack of conclusive scientific evidence from human studies, several players have started marketing A2 milk with claims that it is natural, better, and free from negative effects. In the recent past, several dairy units (local units and some organised players) in India have started offering A2 milk at a premium to consumers. A few of the A2 milk brands are Amul Deshi, Desigo, Haritas, GoShrushti etc. Health debate aside, these new products could be a source of renewed growth and differentiation. Through advanced breeding techniques and other new technologies, farmers could produce milks with express characteristics, such as fewer allergens and specific nutrient profiles. We are already seeing this trend with the rise of milk from grass-fed cows.

Generalist birds that feed on urban trash under threat

Frequent deworming can be injurious to pets