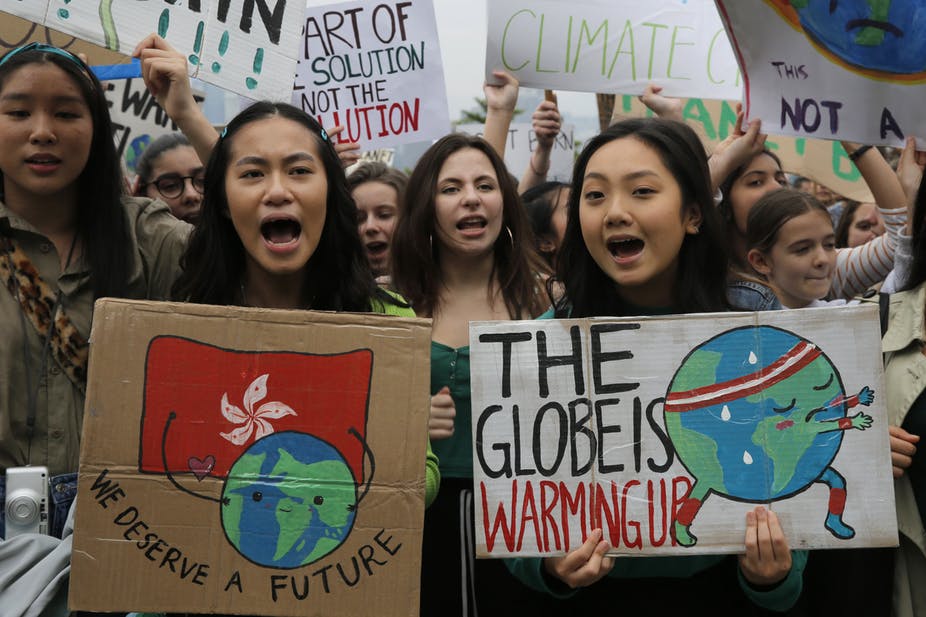 Youth movement against climate change started with Zero Hour in USA and Fridays For Future (FFF) in Sweden, and has now spread in nearly 150 countries of the world. Jamie   Margolin, a seventeen years old US climate activist   from Seattle and her friends launched the youth-led organization Zero Hour in 2017. Greta Thunberg , a Swedish   climate  youth leader ,  got   inspired from  Zero Hour   and launched   Fridays For Future (FFF) in August ,2018. FFF is also known as  School Strike For Future , whose members  take time off from  school classes on Fridays to  participate in  demonstrations  to persuade political leaders  to take action  to prevent  climate change .

Zero Hour is inter-sectional and women-of-colour based. This intersection between climate justice and human rights concerns. It asserts that tackling climate change is not just being concerned about saving the wild animals, or rainforests. It is also about saving the most vulnerable people on earth. It is    more a matter about global justice than about pure environmental message. This makes deeper appeal to the youth. Greta Thunberg was a 15 year old high school student when she started in   August, 2018 the Fridays For Future campaign, protesting outside Sweden’s Parliament every Friday. She was holding a signboard that read: “School strike for climate’’. The first global youth movement was organised by Greta Thunberg on 15th March, 2019.   More than one million strikers demonstrated In 125 countries, in about 2200 events   organised world wide on that day. This was to protest against political inaction against global warming. The second global strike was organised on May 24, 2019 in which 1600 events in 150 countries took place. It    again drew   millions of protesters. These events were timed in such a manner that they coincided with the European Parliamentary election of 2019.

Early in September, 2019, Greta Thunberg sailed to New York city in a solar-powered yacht to attend the upcoming United Nations Climate summit. She travelled by environment friendly solar-powered yacht and not by air. This   was covered favorably by media world wide. On Friday, 20th September, 2019, more than 7 million students from about 150 countries in more than 4000 locations skipped school to participate in the largest global climate protests ever. This was the start of a weeklong  movement to train international attention  on the climate emergency  and was timed to coincide  with a special  UN climate  summit in New York  which  was held  at the headquarters of the United Nations in New York City on Monday, 23rd September 2019. On Saturday, 21st September, 2019, Thunberg and more than 700 other young climate leaders were present at the first United Nations Youth Climate Summit. This was a special youth summit, ahead of the main UN event that began Monday. Greta Thunberg addressed the participants. This Friday was the highpoint in a year of youth climate strikes that began with the first demonstration by Greta Thunberg, when she sat outside the Swedish Parliament.

The historic event is the largest ever event of youth and young adults on climate change at the United Nations Headquarters. The UN Secretary General, Antonio Guterress credited youth for the recent momentum behind the climate movement. He said: "My generation has failed to respond properly to the dramatic challenge of climate change. This is deeply felt by young people. No wonder, they are angry.” COP25 took place in Madrid, Spain from December 2 to December 13, 2019.  On December 10, 2019, the main round of international climate negotiations COP25 was taking place in Madrid. A 16 year old Isabella Fellahin travelled from her home in Indianapolis to Madrid to stage a peaceful protest against polluters like Shell Oil, whose executive was speaking there in COP25.She and other youth activists were not allowed entry by the security guards on December 10. However, on December 11, hundred of activists, led by indigenous youth occupied the main plenary room to demand rich countries pay for damage caused by climate change. Security officers forced them out.  The youth questioned how major polluters like Shell Oil   were not only participating in COP25 but were also being invited onto panels and into closed door discussions. No wonder, COP25 failed to make any significant progress in curbing emissions at international level. A new youth campaign is in offing to ban polluters from COP26 in 2020. Youth leaders will lobby UN and national government officials to secure this objective.

On Friday, 28th February, 2020, more than 20,000 people participated in Bristol Youth Strike in U.K.  when Greta Thunberg arrived to address them. Thunberg arrived in Bristol by train and was driven to the venue of climate strike in an electric car. This was the second time Thunberg had joined protesters in the UK in the past year. The 17 year old activist told the crowd that governments were acting like children and so it fell to young people to be ‘’the adults in the room.’’   Greta Thunberg won many awards including Time’s Person of the Year 2019, Right Livelihood Award 2019, and Glamour Award for The Revolutionary, 2019and International Children’s Peace Prize 2019. Jamie Margolin has won MTV EMA Generation Change award 2019.

The impact of youth movement on adults   has been positive. The young activists are perceived as having greater moral authority than adults. The youth are doing it selflessly. They do not represent some one else’s agenda or any vested interest.  They do not have any hidden agenda. In addition, their protests are louder and better co-ordinated   through social media than their predecessors. Their presence and visibility on social media and in press has    created a positive cycle. The more attention the youth movement gets, the more young people are drawn towards the movement.    Videos online of teenaged climate protestors confronting members of the US congress in Washington DC or French National Assembly in Paris have been uploaded in social media. These are being viewed millions of times and then they end up being embedded in news stories. It then draws millions of youth to the movement.

It is still to be seen whether the movement’s   present participants maintain their enthusiasm as they grow older and leave school. It is also possible that when the present youth leaders grow up into adulthood, a new and younger group of climate youth leaders might be ready to rise.   According to the Harvard Political Opinion Project, over 70 percent of youth today see climate change as a problem, with two thirds believing it “a crisis and demands urgent action”. It is believed that youth movement against climate change will help the world leaders to unite in their efforts and determination to fight against climate change. Let us hope that adults will follow the youth in this cause.