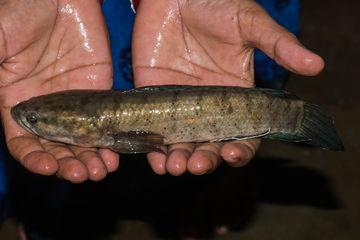 Metal pollution is a serious problem in many aquatic ecosystems as metals are stable and cause short and long term hazardous. Anthropogenic sources (rapid urbanization, industrialization and mining) are the primary contributors to metal pollution in static and flowing water bodies. Metal bioaccumulation assessment helps one to understand metal loading in the system. Fish species are considered as an excellent indicator of metal accumulation for three reasons; they are situated on higher trophic level in an aquatic ecosystem, metal toxicity adversely affects the physical and physiological behaviour of the fish and it is a vital component of non-vegetarian diet of humans.

Continuous discharge of untreated industrial effluents laden with toxic metals is the prime cause for ever rising pollution in River Ganga. Thus, it becomes necessary to assess the concentration of metals (Cromium, Magnesium, Ferum (iron), Cobalt, Nickel, Copper, Zinc, Cadmium and Lead) in river water vis-à-vis in fish samples collected from the Ganga at Varanasi. Therefore, experiments were carried out under my supervision.

Two fish species viz. Channa punctatus (Girai) and Rita rita (Belgegara) have been selected as the test organisms in the present study because these species are important constituent of non-vegetarian diet of the people living in Indo-Gangetic plain. Further, adverse effect of metals on human beings by consumption of metal contaminated fish has been calculated using effective ingestive dose (EID). The effective ingestive dose was compared with reference dose/permissible dose given by US Environment Protection Agency (USEPA).

Degree of metal accumulation in the samples was assessed by bioaccumulation factor (BAF) and metal pollution index (MPI), for the sampled fish. Metal concentrations (wet weight, mg kg−1) in tissues (gill, liver and muscle) of downstream gradient fish were compared with those of the reference site and the Food and Agriculture Organization regulations (FAO).

Results revealed that river water quality declined along the downstream gradient. Accumulation of hazardous metals (e.g. Cromium, Cadmium and Lead) in tissues of fish species was higher than the Food and Agriculture Organization (FAO) regulations. BAF for C. punctatus was found highest in liver for all metals except Magnesium, Copper and Zinc . MPI was highest for liver (18.88 mg kg−1) followed by gill (15.25 mg kg−1) and least in muscles (10.85 mg kg−1) of exposed samples. In R. rita, BAF for Cu, Cd and Pb was higher in muscle tissues  while MPI was found highest for muscles followed by gills and least in liver in both, reference and exposed samples .

The order of doses to which humans are exposed, were found as follows: Fe > Mn > Pb > Cr > Zn > Co > Cu > Cd > Ni. The reference dose (USEPA) for Cr, Co, Cd and Pb was lower than the observed value in both exposed and reference samples. Reference ingestion dose for Fe is not given by the agency. However, the observed value for Mn, Ni, Cu and Zn in exposed and reference samples were well under the permissible limits . For R. rita samples, the EID was found highest for Pb followed by Zn, Cu, Mn, Fe and least for Cr and Ni. On comparing the results with the reference dose given by USEPA, it was revealed that Mn, Ni and Zn were well under the permissible limits while hazardous metals like Cr, Cu and Pb were many folds higher than the given guidelines.

This research work was very well recognized by its publication in an international journal ‘Regional Studies in Marine Science, (2017); 11; 1–8’ and highly appreciated by the scientific community.