A smiling dog is often confusing. My Labrador retriever bitch did smile when petted or belly scratched. But the Tibetan Terrier, who seemed to have a perpetual smile on her face, bared her teeth slightly more to show her anger... 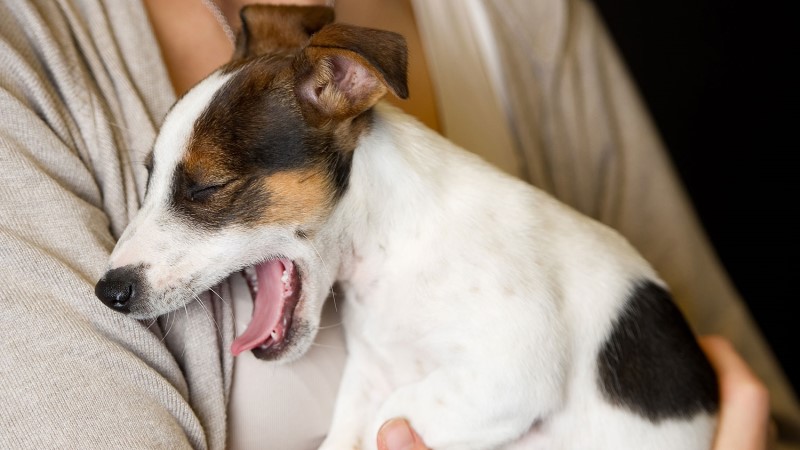 A child goes to a play school and in no time he learns so many things like names of the days in a week, months in a year, and even counting. How does this happen? This is just because the teacher speaks the same language as the mom at home! We have a spoken language. The so-called ‘mute’ creatures like dogs don’t have a spoken language, but they do have a strong body language and they understand our body language better than our own off-springs.

I used to jerk my neck in a particular way in the evenings and that used to be a signal for my Labrador bitch to bring her leash to take her out on a walk. In the night, before going to bed, I used to repeat the same gesture and she used to understand. But on the contrary, if I jerked my neck the way I used to for an outing after her walk in the night, she used to stare at me like a dumb dog with an expression on her face, which used to read as if she said, you jerk…! In other words, my signals were meaningful to her at particular times only.

Let us see, how dogs convey their excitement, love, pain, anger, and fear. Dogs wag their tail a lot. Tail-wagging is not necessarily a sign of happiness. Generally, dogs welcome their masters returning from work with vigorous tail wagging. At that time, even their hind portion moves with the tail. Ever watched a pack of dogs preparing to fight with the other pack/dog? They snort, bark and many of them wag their tails too. Because tail wagging is a sign of excitement. A dog, looking forward to a great fight, might be quite excited about it and wags his tail. But this wagging and the wag to welcome you home are different. One has to have the power of observation to view these subtle differences. It is just common sense that if a dog has tail a between the hind legs and it is rather trembling than wagging, indicates a scared or a shy dog. If the dog is not known to you, never venture out to touch him. He might bite you out of sheer fear!

These days a lot of research is being done on the body language of dogs. As per some researchers, if a dog wags his tail more to his right indicates that the dog is expecting a positive experience-for example, welcoming you home. On the other hand, if the tail wags more to the left, indicates some negative experience like being threatened by a bully! If the tail is wagging round and round, like the rotor of the helicopter shows that he is extremely happy. Ever seen two men start a fight? Apart from shouting at each other, they tend to inflate their chests wider. This is just to increase the volume and to threaten the adversary by indicating I am more powerful! Likewise, dogs raise their hackles. In other words, the hair on their back, especially between the shoulders become erect. This does increase the volume to quite an extent and has the desired effect. Some dogs when being walked by their masters raise their hackles on seeing any person coming from the opposite side. This they do generally to scare away the gentleman, provided he understands the meaning of that! And of course, it prepares the dog to attack.

Opposite to inflating the size of the body is a dog cowering on the ground to ‘reduce its volume.’ This indicates that the dog is scared of something and wants to avoid that. Many shy dogs on their first outing behave like that. They are scared of the sounds and sights on the road. No point dragging such a dog further. It is better to introduce him gradually to different sights. Suppose on day one he cowers near the gate of your house, quietly turn back. But the moment he goes up to the gate happily, reward him profusely. It is slow progress, but patience pays. Some dogs first cower down and then turn upside down to expose their belly with the tail covering their genitalia. Often people think that the dog wants his belly to be scratched. It may be another way around, and out of fear, the dog may urinate a little. Often your dog will push his weight forward and may even wag his tail to left. Your dog is preparing to attack another dog/animal, better move him away from the spot. On the other hand, he may seem to bow to you, commonly known as a ‘play bow’ with his rump high. He is ready to play a game, maybe a game of ‘catch me if you can’ will make him happy!

A yawning dog may indicate a stressed dog. A fully trained dog on way to the vet’s clinic may be relaxing on the back seat, but God knows how he makes out that the destination is nearby and yawns. This helps him to calm down. Try at home, sit near your dog and yawn, quite likely he may yawn back at you. Yawning is contagious, I am sure some of you are yawning as you read this! Whether in a human being or in any other dog, a yawn does increase the oxygen in the lungs. But dogs do destress with a yawn. A dog may flick his tongue a bit and lick his lips. It is not necessarily a signal of satisfaction after a delicious treat but may also indicate a dog’s discomfort in a given situation. A smiling dog is often confusing. My Labrador retriever bitch did smile when petted or belly scratched. But the Tibetan Terrier, who seemed to have a perpetual smile on her face, bared her teeth slightly more to show her anger. With me, she was all right but with an outsider, her smile would suddenly culminate into a threatening growl with teeth bared. Deciphering body language is a complex subject and theoretically, a lot more can be written. But unless you observe and interpret the signals yourself, you won’t learn.