The Himalayas, for instance, are a young range of mountains, as mountains go. They are about fifty million years old and still considered young. But that is a very large amount of time by human standards... 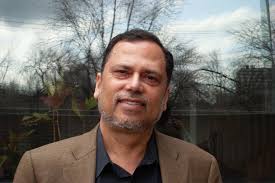 Dipesh Chakrabarty is the Lawrence A Kimpton Distinguished Service Professor of History, South Asian Languages and Civilizations, and the College, at the University of Chicago. He holds a graduate degree in Physics, a Master’s in Business Administration, and a PhD in History. His areas of interest are equally eclectic, spanning Modern South Asian history and historiography; subaltern, indigenous, and minority histories; theory and history; decolonisation; environmental history and most recently – climate change. He is the recipient of the 2014 Arnold J Toynbee Prize, which recognises social scientists for significant academic and public contributions to humanity. Chakrabarty’s latest book, The Climate of History in a Planetary Age, was published in 2021 by the University of Chicago Press, and in India, by Primus Books…

Q: Your book takes the reader on a journey of examination into climate change, and its profound implications for the world. Where does the term “Anthropocene” come in?

The Anthropocene is a name that some Earth System scientists and their collaborators in other disciplines proposed around 2000 for the current geological epoch we are living through. This epoch normally goes under the name of “the Holocene” (meaning recent times) that began 11,700 years BP (before present) when the last ice age ended. Scientists are now claiming that there is enough record in the strata of the planet to suggest that we have exited the Holocene epoch and entered a new epoch that they call the Anthropocene. While the name is yet to be formalised by geologists – something that may or may not happen – the data amassed by the Working Group on the Anthropocene of the International Stratigraphy Commission in London clearly document the very many ways in which humans, the animals they keep and/or farm, and technologies invented by humans have had a massive and unprecedented impact on the geology and biology of the planet, threatening the earth with the warming of its atmosphere and the oceans and the consequent prospect of a Sixth Great Extinction of Life. In my book, the planet is the name I give to what these scientists call the Earth system, the globe is my name for what humans have created – it refers to the technological connectivity that binds this world together to make human flourishing possible on a very large scale. Would it be fair to say that in certain cases, there’s been a usurpation of the “planetary” by the “global”, exacerbating the tension between the two? For instance, take Global GDP and Global Warming. The globe and the planet do not constitute a binary opposition. They are related categories, but they are constructed differently. The crucial point is this, however. You can write a history of global capitalism without having to bother about what geologists and evolutionary biologists might say about the geobiological history of the planet or about what they call “Earth system processes”. But you cannot do that in trying to understand the “Earth system” or what I call the planet. If you want to understand the planetary environmental problems humans face today, some exposure to science writings is necessary.

Q: Intrinsic to this discourse is the concept of time. There’s the time of recorded human history, recording wars and upheavals – but there’s also the deeper geological, planetary time, which, previous to our times, moved literally at a glacial pace. How is this being disrupted in our times, making the arcs of the global and planetary not just overlap, but begin to clash?

Time does not accelerate or decelerate in the story I tell. But biogeological processes sometime involve the passage – by human standards – of humungous amounts of time. The Himalayas, for instance, are a young range of mountains, as mountains go. They are about fifty million years old and still considered young. But that is a very large amount of time by human standards. Which is why as everyday humans we usually don’t bother about such times and take existence of the Himalayas for granted. But when you have the phenomenon of anthropogenic global warming, and the glaciers in the mountains begin to recede, affecting, eventually, the flow of snow-fed rivers, and you begin to build many dams on a young and active mountain, instances of more frequent “natural disasters” force you to think about the geobiology of the mountain – how the rivers originated, what keeps them going, why there can be multiple and dangerous landslides if there is too much use of explosives (for purposes of blasting) on a mountain that is still growing and geologically active, and you are soon in the domain of deep history that you normally, as a human being, would not care to think about. How did this come about? The general answer must be increasing urbanisation and the loss of contact – at the level of the everyday – between humans and the “natural” world. There seems to be a line of historical progression here. Indigenous societies do not base themselves, it seems, on any fundamental human-animal distinction. Peasant – and later farming – societies may make that distinction, but their members deal with plants, trees, animals, and other creatures – both dangerous and safe – as part of everyday life. As we become more urban and agriculture and farming get industrialised, the zone of contact between humans and nonhuman forms of life is not extinguished – that is impossible – but substantially reduced. “Nature” then becomes a matter of holidays and recreation, distant from everyday life. It can still be romanticised, aestheticised, and spiritualised, but all from a distance. City life is based on not having to think about where water, food, and energy (electricity) come from. We take the biosphere for granted.

Q: India and China are amongst the world’s largest users of fossil fuel. Here, the argument is that the same level of ecological stringency applied to industries in the Western economies, where the reckless pace of industrialisation is one of the principal reasons of the present exigency, should not be mandated for developing economies, as this would be tantamount to “climate injustice”. What’s your view on this?

Here again there is no one silver bullet that can take care of our multifarious problems all at once. Climate justice is a real issue. To some degree, developed nations accept the idea that India, China and other populous and less developed countries – though China does not quite belong to this category anymore – cannot be dictated to on the question of the pace of transition to a decarbonised economy. That is why the Paris 2015 Climate agreement was all about “nationally determined contributions” to the process. On the other hand, the atmosphere is one and does not wait for the differences among and between humans to be sorted out. So “justice” questions are not denied by anyone, but for collective action to wait until the justice questions were fully addressed would be dangerous for all nations, albeit differentially. It is somewhere between these two positions that real negotiations aim for. That said, I do think that the developed economies should help the less developed ones make the transition to renewable energy by making technology transfer an easier and affordable process. Maybe we need an “earth” fund to facilitate such a process.

Q: From a methodological perspective, when viewing the course of climate change, is there a shift that is required in our approach to our understanding of the world, from thinking along purely postcolonial lines, to a rubric that is “posthuman”?

The scientific literature on climate change brings to our attention the role played by nonhuman creatures (microbes, fungi, planktons, plants) and entities (glaciers, forests, deep seas, oceanic currents, the Siberian permafrost, polar ice caps) in keeping the earth habitable for complex forms of life. We don’t have to forget human desires and priorities but have reached a position in history where we also must become more aware of how this planet “works”, what makes it a life-bearing planet and how life has, in turn, changed this planet. There has to be a background awareness informing what we concretely do to address the various practical problems being created by anthropogenic climate change.