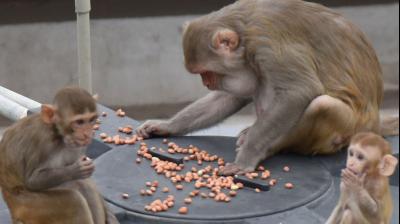 We Asked: Is there a sudden increase in monkey menace in your area too? Have you any idea if there is any construction activity taking place in your vicinity that may have caused their habitat destruction? How do you think these animals be treated?

Of late, there has been a spurt in simian movement in our area. Though our colony is not in their habitat but still the looting and marauding army of monkeys find their way into this concrete jungle. These creatures damage potted plants, clothes, spill edibles and even break electric cables while crossing over from one house to another. Strangely, the administration has no solution to this burgeoning problem in urban areas. For dogs, the administration often sends teams to sterilize the canines but in case of monkeys we are left to fend for ourselves. But the problem is how do we end this menace? Many big societies and corporate houses, hire langoors to scare away the monkeys. However, in case of independent houses like ours it is troublesome to hire langoors. The monkeys usually move in groups and are mostly led by alpha males who are very protective and fiery. They are ready to take on anyone who comes in their way. The monkeys don’t even spare stray dogs. They fight with the strays for food and sometime for even straying into their territory. The fight between dogs and monkeys recently took a violent turn when a stray canine caught hold of a baby monkey. The entire clan comprising over 50 monkeys jumped to rescue the baby and fought a pitched battle with the pack of stray dogs. Such was the magnitude of the fight that traffic was held up on both side of the road for over half an hour. Finally, some brave soul managed to get the baby monkey freed from the jaws of the dogs. However, this didn’t end the feud. The monkeys still find ways to attack the dogs. The simians cling on to electric cables and then hit the dogs who then go on barking bouts creating a decibel boom. The monkeys also pose a major challenge for kids playing outside in open spaces and parks. The simians often come down from nearby buildings and houses in search of leftover food discarded by locals near park and other open spaces. A solution to this problem doesn’t seem to be in site. But surely something needs to be done soon otherwise it will worsen further. Their shrinking habitat and our growing universe are probably where the fault lies. The administration should catch the monkeys, sterilize them and release them in forest areas. -Rahul Pakrasi, senior journalist

Known for their boisterous antics and human-like social organization, Rhesus macaques are extraordinary creatures. Unfortunately, rapid urban expansion and habitat fragmentation push these animals out of their natural habitats, increasing human-primate conflict. We receive innumerous calls about Rhesus monkeys falling victim to conflict, road accidents, trapping  and electrocutions from high tension wires. In recent years, several cities across India have become home to an increasing population of Rhesus macaques. Being highly adaptable animals, these macaques have learned to survive in urban environments where they are widely dependent on the human population. The locals and tourists tend to feed them out of religious beliefs and sentiments and they are often seen roaming about the streets scavenging for food from waste bins containing improperly disposed garbage. Monkeys are integral to our ecosystem and there are a couple of things we can do to ensure their survival. The next time you see a monkey seeking food- DO NOT FEED THEM! This is the best you could do for yourself and the wildlife you seem to care for. Educate yourself and those around you. The only ethical ways to deal with this problem are imposing better animal management techniques and educating oneself.-Roohi Narula, Press Officer at Wildlife SOS

Topic of the month: Is there some commercial activity taking place on the sly that is causing pollution in your area? What is it and is the authority aware of the problem, yet keeping eyes closed? You may send your views (either in Hindi or English) in 300 words at [email protected] Please also attach a colour photo of yourself.