This article addresses the core issue of environmental hazard which has become quite a common feature due to anthropogenic impact resulting in the scraping of natural sediments, soil, rocks and vegetation cover which has impacted the ecology and environment of the region... 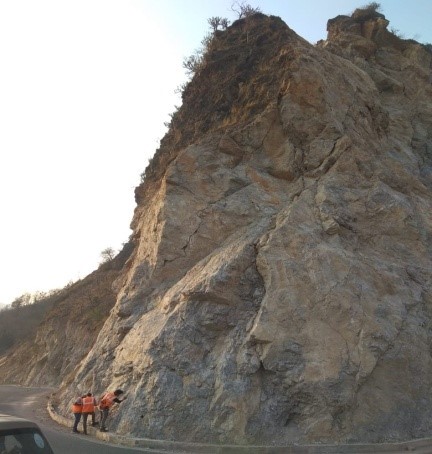 Prof Vibhuti Rai, serving faculty in the Department of Geology, University of Lucknow. The writer has a vast experience in Geology as well as global environmental issues

Namrata Singh, Department of Chemistry, University of Lucknow. She takes keen interest in global issues on environment, ecology and nature

The Himalayas are one of the youngest mountain chains of the world and even in present times, it is undergoing upliftment which is continuing at least for the last 25 million years. Himalayas have grown to the mighty heights because of the under-thrusting and pushing of the Indian tectonic plate under the Asian plate. This has created an orogen (a raised mountain chain) known as the Himalayas. This pushing of Indian plate has generated a gigantic stress on the rocks of the orogen which is continuing even today. It is this very reason that the Himalayas represent one of the most fragile landscapes of the world. The present study reveals that the humans have impacted the Himalayas in a big way which has cascaded into soil and rock erosion and that has become the triggering mechanism for seismicity in the region.

Owing to this charismatic landscape, the Himalayas have been inhabited by human beings in their different settlements for the last 5000 years which has lately become tourist places on account of their relatively cool surroundings in comparison to the harsh summers of the Indo-Gangetic plain. To name a few, in the Indian Himalayas, Shimla, Mussoorie, Nainital, Gangtok, Darjeeling and many other towns of the north eastern region, represent the areas where large floating population resides. In addition, the Indian border with Tibet (China), in the north, is also the territory where our defence forces are continuously stationed in order to address the security issues of the country. These two major aspects i.e., hill station towns and border areas have been under continuous development for infrastructure and habitational requirements for which, civil structures such as road and rail development for supply line, tunnels, dams, bridges, buildings related developmental activities has induced the impact due to anthropogenic activities. This article addresses the core issue of environmental hazard which has become quite a common feature due to anthropogenic impact resulting in the scraping of natural sediments, soil, rocks and vegetation cover which has impacted the ecology and environment of the region.

A synoptic view of the problem has provided the following aspects of causes and issues pertaining to fragility of Himalayan region for which constructive measures are to be planned for future sustainability.

In Himalayan region, the continuous hike in the human population is being observed since past few decades. The estimated number calculated from 1961 to 2011 is 19.9 million to 52.8 million. According to the census reports of 2011, the urban population got increased more than the rural once with the difference of at least 38%. This indicated the fact that the increase population will dwell extra pressure on the government to facilitate them with the basic needs such as the electric supply, being the serious issue in Himalayan region instead of having more potential to generate hydro-electric power, cutting of the rocks to provide the easy transport system. People living in the middle Himalayan region are more vulnerable to the climate change, it is already in fragile condition and the increase in population is acting as adding the fuel into fire. The vulnerabilities which are witnessed by the 50 million lives living in Indian Himalayan region involves the limiting capability of mountain’s agriculture system to withstand even a small degree of disturbance from the calamities like steep slope and erratic terrain conditions besides catastrophic downpours. Increase in population contributes in the depletion of resources, hike in the consumption of natural components like water, forest and land that increases the stress.

The ever decreasing vegetation cover

The Himalayan ecosystem plays very crucial role in the economic growth and for the extraction of life saving medicinal products which are related to the ethnic bio-resources of the country. The presence of high biologically rare species in Himalayan region makes it the biodiversity hotspot. The major findings portrayed from Roy et al.(2015), gives the evidences of the continuous decline in the evergreen broad-leaved forests from the period of 1985-2005 which led to the increase of barren land. This similar shrink in the snow cover has also been observed during this particular time period. The rich forest resource is divided into the two distinct phases in the Himalayan region. The first one was the exploitation of the forests for the urge of development (building infrastructure, construction of roads, dams etc.), this leads to the deforestation and causes the erosion, landslides and impacts numeral lives and leads to the destruction. The agriculture system is getting worse from the past few years due to the drastic change in the weather conditions like the cloud busting, heavy rainfall etc. All these occurrences decrease the proficiency of the farming land. People settled along the riverside ecosystem faced flash flooding and those living along the steep slopes with fragile area experiences landsides. Life becomes more vulnerable to wildlife attack and degradation of crops when settled near the protected areas. The lives of smallholder farmers are greatly affected, as they are given land on lease two times a year by livestock farmers, rice is grown in the monsoon season and maize and potatoes are grown in winter season. This hike in struggle for the farmers limits the opportunity to the employment in such regions. And this pushes young men to go in the cities like Delhi, Guwahati, Bengaluru etc. in search of work, leaving the women and children facing the climatic disasters like flood. The dwindling of the deciduous broad leaved forest during the period 1995-2005 triggered the extension of crop land. Agricultural land requirement has increased in the Himalayan region due to the population growth which has further enhanced the cascading effect of soil erosion.

The major hydroelectric ongoing projects in Himalayan regions are:

The incident noted on 7th February 2021 in the Rishiganga River, the melt of Raunthi glacier triggered flood and the two hydroelectric power projects were washed away – the 13.2 Rishiganga hydroelectric power plant and Tapovan plant on Dhauliganga River. Hydropower projects, dams and construction activities are affecting the fragile Himalayan region making them susceptible to disasters. The sudden change in climate condition gives the hint of the fragility of the mountains. It is recommended that there should be no hydropower development beyond an elevation of 2,200 metre in the Himalayan region. The country temporarily lost about 20% of its hydropower capacity and more than 30 hydropower projects were damaged. The projects, which were affected by earthquake – triggered landslides, were the worst hit. Glacier retreat and permafrost thaw are projected to decrease the stability of mountain slopes and increase the area of the glacier lakes. (Permafrost thawing is the release of the powerful greenhouse gas methane into the atmosphere).

• Climate change has been driving the foreboding effects on the unique Himalayan ecosystem (the loss of rare species and animals).

• During the course of the last few decades, the rate of the environmental warming has been increased in the Himalayan and Tibetan Plateau regions as compared to the rates observed during the past century.

• The elevation of 0.9⁰C in the temperature of the Western Himalayan region has been noted by Dash et al.(2007),  during the 102-year period 1901-2003. This has been found that much of the hike has been attained due to the increment of temperature after 1972 as industrialization based impact.

• The slight shift in the change of climate puts vulnerability to the faster degradation of land. The gigantic anthropogenic pressure in various Himalayan domains clubbed with inherent seismically active position makes it very vulnerable to increased erosion of rocks and strata, soils and vegetation. The load shedding created by the transfer of sediments from the Himalayan region to the Ganga plain, creates an isostatic disbalance. The pushing and thrusting of the Indian plate under the Asian plate, therefore becomes more vigorous because of the reduction of overload (scraped Himalaya). The resultant increased pushing velocity triggers earthquakes depending upon the susceptibility of the terrain within the Himalayan region. This increases the seismicity which can be attributed directly to the anthropogenic impact. And it can be simply classified as man induced seismicity.

The current situation has disturbed the Himalayan fragility and needs to be addressed by way of slowing down the development in the Himalayan domain and only local building techniques and usage of locally available rocks and building material such as wood can help in a big way. In addition to mass scale plantation of dense forest along the eroded areas, it is a necessity to avoid further degradation and erosion of rock mass. It may take a few years to initiate the process of un-weathering the weathered strata. It is also proposed that the proper management of rain water, surface water and ground water methods are required to channelize so that it reduces the weathering process. Participation of various government department to plan the protection of degrading mountain is to be substantiated by all the people who are stakeholders in the Himalaya and the role of environmental scientists to explore and research using latest technologies and educating the rural folks and children in general across the Himalaya would be helpful in sensitizing this very important aspect of degrading Himalayan mountain and its fragile stratus to be recovered with a stable one.

Why is it exceptionally hot this year?