he problem I foresee in the short and medium term is a serious one: The timeline we have that might allow us even a 50/50 chance of keeping temperatures to 1.5 degrees Celsius — the stated goal of the Paris accords and the global community of nations — is insanely short... 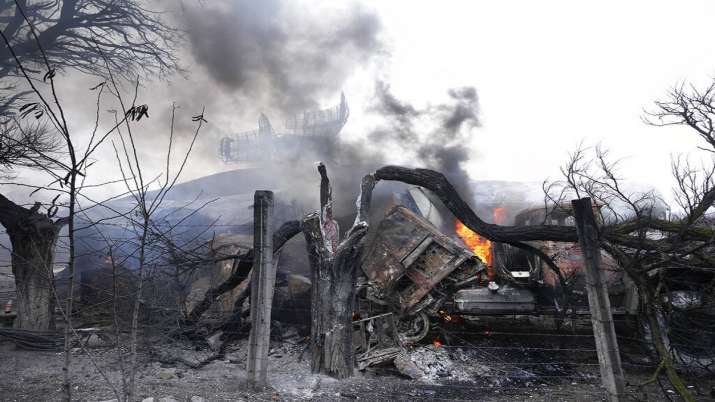 We Asked: Are global efforts to reduce the rate of climate change being compromised by the ongoing Russia-Ukraine war?

Russia’s invasion of Ukraine is a humanitarian catastrophe, but it has also scrambled the energy landscape. One consequence: An unfortunate new lease on life for coal in places that were aggressively phasing it out, most notably Europe. Though Russia is still supplying oil and gas to countries highly dependent on it. And though the US is much less reliant on Russia, plenty of powerful people here are using the war to make the argument that a too sudden pivot from fossil fuels is a bad idea. Suddenly, the transition to clean energy, in many countries of the world that took it very seriously (so, not America) has taken a back seat. This is a major setback to global efforts to reduce the rate of climate change. The problem I foresee in the short and medium term is a serious one: The timeline we have that might allow us even a 50/50 chance of keeping temperatures to 1.5 degrees Celsius — the stated goal of the Paris accords and the global community of nations — is insanely short. Any delay basically puts it out of reach. And this will be a delay. In the long run, I think it may be helpful, in the sense that it has illustrated very clearly some of the non-climate costs of fossil fuels, and made a lot of people a lot warier of dependency not just on Russia particularly but on other politically problematic petrostates as well. Another worrisome feature is rising prices. For a long time, economists pointed to a carbon tax as the smoothest path to decarbonizing everything. That thinking has been revised or cast aside in the last few years. But seeing the governor of California pushing billions in gas-price relief does make it a little harder to imagine a politically workable path to decarbonization that takes us through a higher cost of fossil fuels. But those who had hoped that higher oil prices might be good for climate change are probably, at the very least, ambivalent about the world’s response, which has been much more focused on short-term needs than longer-term solutions. I think it is difficult for anyone to be aggressively retiring dirty sources right now, which is ultimately what is necessary. But I think the logic of large-scale investments for the long term is going to be a lot clearer and stronger. The problem is just that there is no time left in any of our models for the delay. In 2018, the UN declared that to keep 1.5 degrees alive as a target required a 45 percent reduction of emissions by 2030. Every year since has had higher emissions than all the years that have ever come before in all of human history. The IEA and most other watchdogs expect emissions to continue to grow for at least another few years from here. So, we’re out of time. In the present scenario of the Russia - Ukraine war where a lot of financial resources of various countries are wiped off & draining in war continuously will definitely impact large scale investments for measures to be taken to resolve the issues of climate change. To conclude in my view - Global efforts to reduce the rate of climate change will face sacrifice and will be compromised. -Anuj Kumar Saxena, DFO (Retd), UP Forest Department

Russia’s invasion of Ukraine has unsettled the market and geopolitics of energy, driving up oil and gas prices and making many countries reconsider their energy policies. Opinions on the effect of this are divided, but it is without doubt that in the short-term spike in fossil fuel prices and import substitution will continue, while many see this as a chance for the world to shift to alternate sources of energy in the long term. As Europe explores alternate countries to source their oil and gas, for example Qatar or the US, a number of countries like the UK, Belgium, Italy and Netherlands have revisited their energy policies on nuclear power and wind and thermal power. In the immediate aftermath however, there has been talks about building more infrastructure that allows non-pipeline based oil supply from other countries, and a dangerous precedent does seem to be rearing its ugly head whereby countries increase investment in oil and gas manufacturing and supply chains. At a time when the world needs to be weaning off fossil fuels in light of IPCC’s damning report on climate change, further investment in alternate supply chain for fossil fuels will be a set-back for climate action goals. Severing energy dependency on Russia has also not been easy for even EU countries that currently source most of their cheap oil and gas from Russia. While the US and UK have placed embargos on Russian oil, their collective share is very small compared to other EU nations and the war has in fact caused a spike in oil supply flowing into EU countries from Russia, given that none of the countries have been quickly able to diversify their sources or come up with an alternative. The fear remains that as always, once the dust settles, countries will go back to choosing easy energy over responsible energy and the war will just have contributed to increased investment in global fossil fuel infrastructure in a bid to simply replace Russian oil at cheap prices. -Paroma Mitra, second year student at the McCourt School of Public Policy, Georgetown University

The recent past has seen a geopolitical world order in which the two giants, the United States of America in-tag with European countries and the communist Russia have reached a level of conflict in which a global chaos has set in. The Russian intrusion in Ukraine has a great political alignment and non-alignment due to which there is acute economic crisis on both sides of the world. This crisis extents further into the domain of climate because a huge destruction in Ukraine during the war has led to destruction of flora and fauna besides spread of weapon based chemicals destroying the environment in a big way. A telescopic view of the situation in the coming future seems to be much perilous as the new geopolitical set-up where sanctions have been imposed by the US on Russia and also by its allies, mainly the western block of the European union, on import of gas and petrochemicals from Russia, is going to create a situation where conventional energy products such as coal and other hydrocarbons are going to be the only viable solution to the requirement of energy resources for Europe in general, Germany in particular. As such 55% of the total gas requirement of Germany and 40% of rest of the Europe is supplied from Russia in 2021 by pipelines which is being consumed for power generation and heating of the houses during the acute winter season. A blockage in the supply of natural gas from Russia would generate a situation where Germany and other European countries have to shift to import of these fuels from other parts of the world. This is not going to be an easy solution as huge development of infrastructure for ferrying out this precious gas from elsewhere would require the development of specialized shipping containers, also the developments of the ports to handle the geofuel. the process involves first compressing the natural gas into LPG at extremely low temperatures at the point of origin, then this liquefied petroleum gas is carried in big tankers and finally it needs to be off loaded at ports to be heated again in order to convert into the natural gas and then being supplied in the different part of the countries. This is going to be such a massive exercise which would require huge man power support besides infrastructure in contrast to the existing piped gas supply from Russia. In the light of current situation there is quite a possibility that coal based power plant which releases massive carbon-di-oxide and carbon rich gases into the atmosphere would be considered as viable option besides using other fossil fuel for conversion into thermal and electrical energy. If many of the European countries start importing these fossil fuels and gas, it would end up in huge build-up of carbon rich concentration in the atmosphere. Several treaties at global level, held to reduce carbon emission in order to contain the climatic chaos would be jeopardized and the end result would be quick raise in the carbon concentration in the atmosphere, thereby enhancement in global temperature, contradiction to the world’s effort in bringing down the Global temperature to contain the global warming at steep rise. A ray of hope can be seen in tapping the non-conventional and renewable energy resources specially for power generation and vehicular traffic but such a breakthrough technology is yet to be evolved and may take several years to become viable and affordable for public at large. In essence, we can say that the globe is going to be impacted on the environmental front as well as climatic conditions going haywire because of this Russia-Ukraine war. Provided, appropriate steps are taken by the world community ignoring their national issues over and above the global issues. In the next few months, situation can be evaluated with action taken by the member nations of the World Climate Summit and Global Climate Forum. -Prof. Vibhuti Rai, serving faculty in the Department of Geology, University of Lucknow, & Namrata Singh, a young enthusiast from the field of Chemical Sciences. She is pursuing her Masters from University of Lucknow

Topic of the month: Is there a sudden increase of monkey menace in your area too? Have you any idea if there is any construction activity taking place in your vicinity that may have caused their habitat destruction? How do you think these animals be treated? You may send your views (either in Hindi or English) in 300 words at [email protected] Please also attach a colour photo of yourself.