But if one is adopting a grown up dog for any reason whatever, what are the precautions and what are the ways to make the dog at home in the new environment are some points which need to be thrashed... 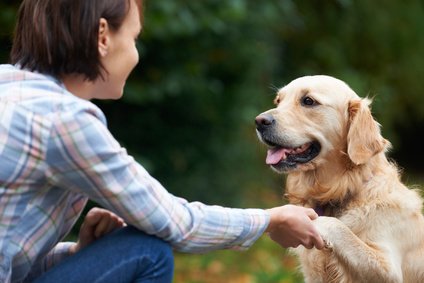 Most people prefer acquiring a puppy, because they feel that a puppy can adjust better, easy to manage and gives one the feeling of rearing a baby from infancy. Well to some extent these feelings are correct. But if one is adopting a grown up dog for any reason whatever, what are the precautions and what are the ways to make the dog at home in the new environment are some points which need to be thrashed.

Before moving to solutions, it is better to know some traits of dogs. Those who have read these articles know very well that dogs are highly territorial, pack animals. In the matter of territory, they are so finicky that if a dog sleeps on a particular mattress he would not like to share it with other dog (unless she is an opposite sex, but not always). Most naughty (dominant) dogs try to sleep on the bed of the other to show that they have occupied the other dog’s territory and challenge to be thrown out. Some dominant but physically weak dogs are not able to do so, they sneak to the other’s bed and pee over it to prove that it is their territory. The moral of the narrative is that if you have another dog at home (particularly of the same sex) then they must be introduced to each other, at some neutral territory outside your home and once they start wagging tails and begin to invite each other for play, bring the new one home. Beware not to let the new dog straight away reach the older occupant’s bed or box. Let the new one also not reach the older dog’s toys-there will be a WAR if territory is encroached.

The same thumb rule applies if you intend to bring a new puppy at home, where the older dog is already there. The age and sizes don’t matter, their instinct remains the same. I had an eight year old Chihuahua, when I got a Miniature Pincher puppy. Both were bitches. The Minpin puppy was delivered to me at the Dog Show, where the Chihuahua was being shown. I thought these toy dogs will not bother and let them together in Chihuahua’s box. They were normal in the show ground. But the moment I placed the box in the car, the Chihuahua started to growl menacingly. And as soon as I tried to take out the Minpin, the Chihuahua attacked my hand and the puppy both. It was a big job separating them. From that moment till the Chihuahua died four years later, they remained sworn enemies and if they got a chance they used to fight viciously. Later, the Minpin got much stronger and she used to dominate in fights and also pee at the spots where Chihuahua used to sit. The hatred continued for years even after the Chihuahua died, the Minpin continued to mark the spots with vengeance.

You are somewhat lucky if you do not have another dog at home, while you bring an adult dog. It is sure that the dog is going to miss his old territory, bed, bowl and toys. Therefore, it is best to get his ‘stuff’ along, so that at least in his ‘lair’ he finds the same ‘aroma’. The first thing he will do is to sniff around and identify his area and even leave his mark outside to let other dogs know of his arrival. If you have children up to five years old in your house then you have to ensure that they do not start touching and fondling the new dog immediately on his arrival. Let him settle down. It is always expected that you will cross check the behavior and attitude of the dog towards strangers, particularly children before the dog arrives at your place. Some dogs though exceptionally docile may behave weird with children. When Goldy the Labrador bitch landed at my place at the age of four, she did not like being touched by my three-year-old daughter and growled menacingly and finally tried to bite her on the stomach. Fortunately, the winter clothing saved her. Within a week’s time they did become best friends, but had I taken precautions, the mishap could have been avoided!

Once the dog has settled down in his allotted space, he will sniff all the new family members. Let him sniff. Do not show any extra emotions and also do not stare into his eyes. Staring is a challenge between two strange animals. Yes, you all are animals (members of his pack) for the new dog. Once he is confident that the new pack is welcoming him, he will show his affection via his tail and he can be gradually caressed by all the family members. As a precaution for a few days, children should be discouraged from entering his ‘lair’. Who knows he may still be mentally disturbed and attack, fearing an encroachment in his new territory! Yet another precaution to take is to find out in detail about the commands (let the previous owner use them, so that you also know the tone and tenor of the commands) and food habits. It is best to observe the dog being fed, so that you will also know about his eating speed etc. A change in eating habit sometimes indicates health problems.

Armed with all possible information about his habits, likes and dislikes you bring the dog home. Explain all that to the family members too, so that it becomes easier for everyone to understand the new dog and vice versa. An important point to remember is that some breeds like Labrador retriever, Golden retriever and Pug are generally people friendly. They are much easier to adopt at any age. Other breeds like the Alsatian, Corgi, Rottweiler and Great Dane are very intelligent, but they need to be first made friends by at least one member of the family before being brought to new home. To make friends ask the old owner to bring the dog outside in some common place like a park. You meet the dog there, caress him, offer him a tidbit as a reward and talk to him soothingly and go away. Next meeting spend some more time with the dog, reward him and go away. Third time meet him in his house and repeat the earlier procedure. This will ensure the dog that you mean no harm. Finally in your house in your company such a dog will be very confident and soon become friends with everyone. Breeds like a Spitz, Lhasa Apso, Dachshund, Miniature Pincher, Chihuahua etc. are always highly strung. They are always apprehensive of strangers. Thus, before transporting them, it is better to make good friends with them. This will make their life easy.

Sometimes a dog is transferred within a family from one location to another. In such situation dog already knows everyone. Therefore, the problem of making friends does not matter. But yes, relocation means a change in his territory. Therefore, remember to carry his bedding, box (if possible), bowl, toys and grooming tools to his new location. The dog will himself explore the place and adjust sooner than you think. Personally, I find bringing home an adult dog and rearing him far easier than rearing a puppy. In adult dog, house training, chewing things etc. are no major problems. Plus, a puppy is always prone to sickness, colds etc. But of course, rearing a puppy develops a greater emotional bond between the owner and the dog.

Animal rights activists must think outside the box

‘We are living on one-and-a-half-planets’