Vultures are classified as “birds of prey” but they do not (or very rarely) actually “prey” on anything. Instead, all vultures are scavengers that habitually eat dead animals... 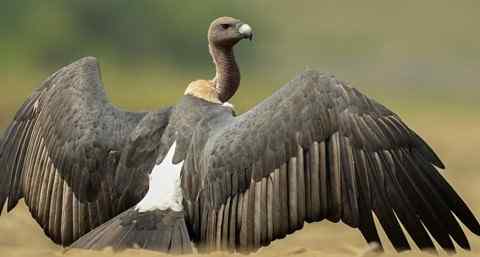 Michelet, the renowned French Writer, said: “Birds might live on this earth even if there were no men, but men cannot live without birds.” He was saying no more than the bare factual truth (Ali, et al., 2008). Birds are an integral part of the whole system of life on this earth and this is enough to justify their importance. Out of the many services rendered by the birds, a remarkable one is keeping the environment clean by disposing off the carcasses by the Mother Nature’s cleaning squad-Vultures.

Vultures are classified as “birds of prey” but they do not (or very rarely) actually “prey” on anything. Instead, all vultures are scavengers that habitually eat dead animals. Not only Gypsophils or vulture enthusiasts but people from all walks of life have been spellbound by the kings of the sky vultures, for their huge size, striking appearance and grandiose flights (Ali et al., 1995 and 1996). The term “vulture” has been derived from the Latin Vultur, which is itself derivative of vellere, that stands for “plucking or tearing”, unfolding the feeding behaviour of vultures i.e., the intake of flesh from carrion (Egyptian Mythology). There are 22 kinds of vultures which includes 15 types of ‘old world’ vultures found in Europe, Asia and Africa and seven types of ‘new world’ vultures found in America. There are nine species of vultures found in India (Ali et al., 1995): King vulture (Sarcogyps calvus), Cinereous vulture (Aegypius monachus), Griffon vulture (Gyps fulvus), Himalayan Griffon vulture (Gyps himalayensis), Long-billed vulture (Gyps indicus), Slender-billed vulture (Gyps tenuirostris), White-backed vulture (Gyps bengalensis), Egyptian vulture (Neophron percnopterus), Bearded vulture (Gypaetus barbatus). Since vultures mainly feed on the corpses of large mammals, they do not live in places like Madagascar, Ceylon, and Malayan Islands or Australia where there are no herd forming mammals of the open country.

Breeding habitat plays a key role in the fitness of vultures and, for a given species, nest site quality varies in space and time at different scales due to different environmental factors, which affects reproductive success. Vultures are colonial breeders except for the Red-headed vulture. Breeding colonies are mostly located near sources of water such as rivers, canals, ponds or dams. The diameter of a nest is approximately 60-90 cm and a single nest can consist of between 2000 and 4000 sticks, the number varies according to the availability of nesting material as well as the requirement of each breeding pair. The leaves of Eucalyptus and Neem (Azadrachta indica) are most commonly seen in nests. The leaves of Eucalyptus and Azadirachta indica are known to have insect repellent properties.

The cleaners are themselves clean birds

Among the birds of prey, the vultures can be considered as the most “sterilized” bird. Before taking the flights in search of food, they gather at the river banks to drink water. An inimitable aspect is that they take a bath after each mealtime, so water bodies are important for them. They do this so that the harmful bacteria and other disease causing micro-organisms from carcasses does not stay in their feathers or on their skin, infecting the vultures with diseases. After the meals, they also go for sun basking. They spread out their wings, facing the sun rays called the “horaltic pose”. Sunning exterminates the bacteria and other microorganisms on their body. This may continue for an hour or so. Preening is another way of vultures to remove dust, dirt and parasites from their feathers and aligning feathers into the most aerodynamic shape for easier, more efficient flight.  The New World vultures, urinate on their own legs so as to keep the body temperature low and to kill the bacteria or parasite on their feet. This is termed as ‘Urohydrosis’. The urine has strong chemical properties.

Vultures are the most excellent scavengers. Vultures, being obligate scavengers live on carrions and help in disposing of the dead bodies, reroute energy flows to higher food webs, help in nutrient cycling, and help control undesirable facultative mammalian/avian scavengers, and limit the spread of diseases. A flock of vultures is enough to clean up an adult dead buffalo in less than an hour. The only skeleton left is then collected for fertilizer factories. The vultures leave only the skeletons with no remains of meat/soft remnants.  Mammalian scavengers like the rats and feral dogs are facultative scavenger are incapable of such a clean and quick work because they only scavenge on tissues of their choice. The increase in mammalian scavengers at carcasses may have unknown ecological consequences. Most scavengers are also predatory, and increase in their population as a result of the abundance of carrion is likely to lead to higher predation pressure on wildlife such as mammals, ground-nesting birds, reptiles, and amphibians.

The present situation of the clean squad is critical. The conservation requires the collaborative efforts of everyone. We need to protect the natural habitats in order to save vultures. They need the cliffs, large trees, water bodies, native plants to build their nests and safe feeding sites for in-situ conservation. The local people particularly the farmers and herders have extensive information about vultures and can play a key role in vulture conservation. Vulture restaurants managed by local people may also serve as an important conservation tool. Inescapably conservation solutions, must involve local people and communities who live in close proximity of vulture habitats and get the advantage from their ecological services.

Fear kills not venom Currently, there is a gap between the conservation needs of snake