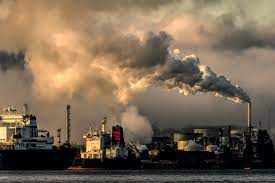 Emissions trading is a market-based approach to controlling pollution. Under the emissions trading system, the government sets an over-all limit on emissions. Then it issues permits   according to that limit. It may sell these permits or may  allot permits to  regulated polluters  equal to  the polluter’s baseline emissions. The baseline is determined by an agency of the government  by reference to the polluter’s historical emissions. A polluter must hold permits at least equal to the  pollution actually emitted during the defined time period. A participant can choose to  emit more than its permits  by buying from other participants, thereby paying  a charge for polluting. On the other hand, a participant may choose to emit less than  its permits by polluting less. In that case, such a participant can sell the extra permits  held by it , thereby getting monetary reward for  reducing emissions and pollution. This is called Cap and Trade (Or CAT).Cap and trade provides the private sector with  flexibility to reduce emissions. They can  stimulate technological innovations  while  striving for economic growth.  Emissions Trading has been  adopted by a number of developed countries. It has also  criticised  on many grounds including ineffectiveness.

India is currently the third largest  polluting  country in the world. It is  likely  to  contribute  6 percent of  global greenhouse gases emissions by 2020.  But  Government of India has  historically opposed  taking on  mandatory  emissions reduction targets on the ground that  climate change is a problem caused by developed countries. As a result,  it has not been possible to achieve a consensus to have an Emissions Trading (cap –and- trade)  system or policy in that regard. However, a pilot  project  Emissions Trading System, with an aim to reduce emissions of particulate not carbon dioxide, in the three states of  Tamil Nadu, Maharashtra and Gujarat  has been  implemented.

Instead of an Emissions Trading System, India  has taken two initiatives:

In addition to above two, India participates in international Clean Defence Mechanism, as will be explained shortly.

PAT is somewhat different from  Emissions Trading System (ETS). Under ETS,  absolute emissions reductions are achieved   through  trade in  emissions reduction certificates  or permits. The structure of PAT flows from   the Energy Conservation Act  of India of 2001, which requires 15 energy-intensive sectors  to implement energy efficiency measures. Energy Conservation Act, 2001  was amended  to enable  trading of  Energy Savings Certificates  (ES Certs) within the PAT system  in order to  avoid default in  obligations. PAT sets  mandatory  energy efficiency targets  on 478 facilities  that are either part of energy- intensive industries  or members of the electricity sector .These 478 facilities  comprise  about 60 percent of  India’s 2007  GHG emissions. PAT energy aims to reduce emissions  by 20million  tons of  Carbon dioxide (e)  as well as save 6.6 million  tons of oil equivalent over  2012-2015 period. All covered facilities are obligated to improve energy efficiency by 1-2 percent  per year. Installations  must achieve  their plant –specific  targets within  three year compliance period. An installation  that exceeds its  SEC (Specific Energy Consumption) target  will be able to sell its ES Certs for the amount of its  surplus energy improvements  to  those installations  that are unable to meet  mandatory  targets. Trading occurs via regulated exchanges.  Platforms  for trading  ES Certs  have been designated  in the two power exchanges  IEX and PXIL.

India’s REC  trading  system  was launched in November , 2010.Its purpose is to promote  renewable energy even in regions  that have low potential  for renewable energy generation.  The Ministry  of Power  regulates the REC mechanism  under Energy act,2003. The country’s State  Electricity Regulatory Commissions (SERCs) sets targets for power companies to purchase a certain percentage of  their total power from renewable energy sources. These targets are called  Renewable Purchase Obligations (RPOs).The covered entities  may trade RECs  either within or  across states. The Eligible Entities are  the  generators  of renewable energy and  the Obligated  entities are the purchasers  of this power (Utilities). Purchasing RECs is treated as  the consumption of a certain quantity of  renewable power  and thus, can be used  towards fulfilling  the RPO of  the Obligated Entities. Each REC  represents one MWh  of a covered type of renewable energy –solar, wind, small scale hydro, biomass-based power, biofuels and municipal  waste–based power. As a result, facilities are able to meet their  renewable energy targets  even if the local climate is not well-suited  for renewable energy generation. The REC system enables  obligated entities to weigh  the costs and benefits of achieving  their renewable energy commitments  by selling electricity from  renewable sources  or by purchasing  RECs. The Central Electricity Regulatory Commission  (CERC)  is the Central authority  responsible for co-ordinating REC processes  and providing the central regulations  for the REC scheme.  The implementation of the REC s itself  is done by SERCs ( State Electricity Regulatory  Commissions) ; they are responsible for setting or changing  state RPOs, providing a regulatory framework  for the state REC processes  and monitoring the REC scheme.

India is the world’s second largest  supplier of CERs  (Certified Emissions Reductions)   under Clean Defence Mechanism  after China. As of March 2015,  India has been cumulatively issued  13 percent of  CERs  out of the total of  1540.8 million CERS  issued around the  globe since 2001. Moreover, India has  the second  largest number of  CDM projects  2048 out of 8640 – registered with CDM Executive  Board. Energy project, deriving from wind, biomass, hydro, and energy efficiency projects , comprise the majority of CDM projects  originating in India. In March 2017 , the World Bank  granted India 8 million US dollars  to design a pilot  carbon market. Under the Paris  Climate agreement , India plans to reduce  its emissions  intensity  by 33 percent  below 2005 levels by 2030.A nationwide  carbon market  would help to achieve this. But India has yet to establish its emissions trading scheme.  It is hoped that  in due course, India  will move from PAT system to  a complete  Emissions Trading System (ETS)  which requires better data collection, better trained manpower and stronger non-compliance penalties.

Your best friends are being churned out in mills!