R Misra was the person who laid the strong foundation of Ecology in India & not only he just laid it but also, he contributed a lot to strengthen the development of Ecology further & thus aided it to flourish progressively over the upcoming decades... 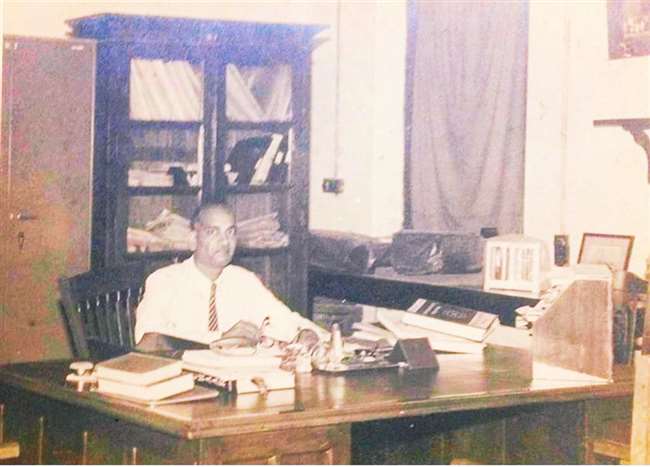 Ramdeo Misra (1908–1998) is considered as Father of Indian Ecology simply because he had contributed remarkably in the field of Ecology among his contemporaries in respect to Indian context. Ecology can be characterized as the investigation of communication among living creatures (plants, creatures, microorganisms) as well as connection with its abiotic climate (temperature, water, air, soil, light, and so forth). R Misra was the person who laid the strong foundation of Ecology in India & not only he just laid it but also, he contributed a lot to strengthen the development of Ecology further & thus aided it to flourish progressively over the upcoming decades. He helped in shaping Ecology as a major discipline for teaching as well as for Research in traditional departments in India in many ways.

Some of his notable contributions are:

I) The first MAB Research Programme in India was launched by Ramdeo Misra ji at Varanasi in 1975.

II) He was the person who formulated the Ist postgraduate course in Ecology in India.

III) He published a book entitled “Indian Manual of Plant Ecology” Co-authored with GS Puri which became the first text available in the country in 1950 related to the subject.

IV) He was the first person who experimentally reported the population differentiation in plants.

V) The country paper for India presented at the Stockholm Congress of World Governments in 1972 by then Prime minister Smt. Indira Gandhi, was prepared in the guidance of Prof R Misra who was serving at National Committee on Environmental Planning & Coordination (NCEPC).

VII) During his career, he also integrated the habitat adaptations with varying phenotypic & genotypic plasticity of plants in response to Environmental conditions. Demonstration of the alternation of Hydrosere & Xerosere in low lying areas constitutes a part of his significant observations. He also blended Zurich-Montpellier concept of Phytosociology, Clementsian approach of dynamic vegetation as well as Turesson's approach of genetypic response, & so many other concepts with his original thinking.

IX) Apart from this, his “Ecology work Book” designed for “The Ecology Summer School” organized in 1966 had a huge impact on the dispersal of Ecology & Environmental Sciences in other parts of the country.

X) He was the first Vice-chanceller of the International Association of Ecology (INTECO).

XI) He also played a key role in the International Biological programme (1964) & also in UNESCO'S MAB Programme where he represented India for many years.

XII) He founded the National Institute of Ecology as well as International journal of Ecology & Environmental Sciences.

XIII) He was the recipient of Birbal Sahni Gold medal of Indian Botanical Society .

XIV) He continued to work even after his retirement at Banaras Hindu University as an Emeritus Scientist.

XV) Prof Misra devoted his entire life to contribute greatly in establishing as well as improving Ecology discipline in India until his health failed him to do so.

So, India owes a lot to R Misra for his vision & all the untiring efforts. His studies provided a turning point in Ecological Research in India & propagated a massive wave of research in this direction. That is why he is considered as Father of Ecology in India. As indicated by Odum, who is known as the Father of current Ecology, "Environment is the investigation of design and capacity of Ecological systems".

Applied Ecology manages the investigation of protection and getting monetary advantages of creatures, for example untamed life the board, agronomy, and so forth; Gynaecology is the investigation of hereditary organization and variety present in networks contrasted with the climate and populace dispersion and beginning of new species, ecads, ecotypes, and so on; Framework Ecology is the most present day part of nature, which exploits applied arithmetic, software engineering and progressed factual strategies to get the design and capacity of an environment.

Creature is the littlest and essential unit of nature. It incorporates every single living life form, unicellular or multicellular, having a proper life expectancy. Species or Population are individuals from similar species living in a particular geological region. An animal category is a gathering of creatures that have a typical genetic stock and can interbreed to deliver fruitful posterity. Endemic species are tracked down just in a specific region, for example kangaroos found in Australia. Key-stone species is for the most part a hunter animal group, which is absent on a huge scale yet affects the attributes of a local area, for example lion in the woods. Basic Link species, which help different species in their indispensable exercises, for example pollinators for plants, parasitic and advantageous connections. Local area is the connecting gathering of different various species living in a space, incorporating plants, creatures and microorganisms. Ecological system is the utilitarian unit of nature. It incorporates the biotic local area and the interfacing actual climate related with it. Biotic parts and abiotic parts comprise[t1]  an Ecological system. Biotic parts incorporate makers, buyers and decomposers. Abiotic parts incorporate climatic circumstances like temperature, soil, water, air, light; inorganic and natural substances like nitrogen, phosphorus, sulphur, starch, protein, lipid, and so forth. Biome comprises networks present in a huge topographical region. Biosphere is the complete amount, all things considered. It is otherwise called the zone of life on Earth. It incorporates every one of the living creatures, their connections and communication with the components of air, hydrosphere and lithosphere. Territory is a common habitat of an organic entity where it develops, resides and recreates. It is an environmental region the most appropriate for an organic entity. Living spaces fluctuate in the physical and compound creation. It incorporates abiotic parts like water, temperature, light and soil and biotic parts as well, for example parasites, contenders, microbes and hunters communicating with them continually. Life exists in the greatest living space as well as in the most limited and cruel climate. Nature at an organic entity level attempts to see how various species adjust to their surroundings for their endurance and generation. Specialty incorporates all the connections of an animal group with the biotic and abiotic variables of its current circumstance. Every species has a characterized scope of different abiotic factors that it can endure, various assets it uses for endurance and plays out a particular useful job in an Ecological system, every one of these together structure a specialty, which is remarkable to an animal varieties.

‘We are living on one-and-a-half-planets’

Let us not depersonalise climate change