The Dudhwa National Park offers a peep into the culture and customs of this prolific community. We got the opportunity to meet a few women from the community near the jungle who talked to us about how the jungle has been home to them for centuries... 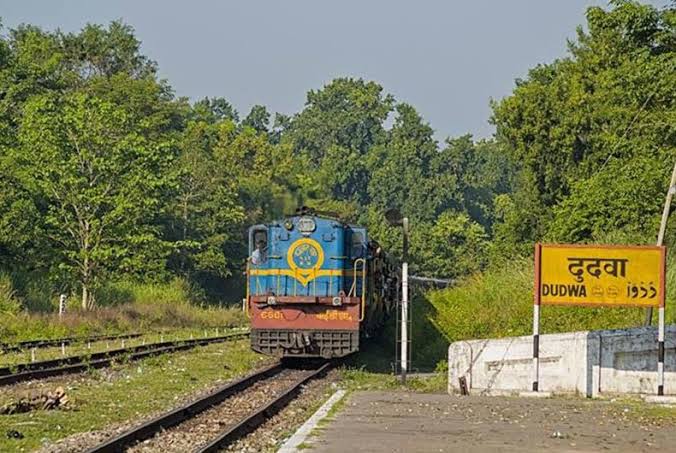 Dudhwa National Park is located in the state of  Uttar Pradesh in the Terai belt which is also referred to as the sub-Himalayan region. It is nestled in the Lakhimpur Kheri District on the Indo-Nepal border. Along with the Katarniaghat Wildlife Sanctuary and Kishanpur Wildlife Sanctuary it forms the  Dudhwa Tiger Reserve. The  jungles are home to a  wide variety of animals, birds, flora and fauna. The 490 sq km park is a thick blanket of elephant grass with large patches of sal trees and wet marshes.

The park was initially set-up as a wildlife sanctuary for the Swamp deer in 1958. However, 'Billy' Arjan Singh (an Indian hunter turned conservationist and author) put in a great deal of effort towards getting  the region deemed as a national park in 1977. The park came under the purview of 'Project Tiger' initiative in 1987 and was declared a tiger reserve. Beside the tiger, swamp deer and barasinghas form the  main attraction of the forest reserve. Some other faunas of the park are Indian rhinoceros, ratel, leopard cat, fishing cat, barking deer, sloth bear, civet, jackal and the endangered hispid hare. The main floras of the park include sal, shisham, asna, jamun, sehore, gular, and bahera. Grassland comprises around 19% of the national park.

The best time to visit this park is from May to November  and so we decided to visit this beautiful forest in the month of November with friends and family. One can reach the park by train or by road. The distance from Lucknow being approximately 245 kilometres which can be done in 4 hours by car. Enroute one can eat at the road side dhabas (food joints) and enjoy the road trip to the virtually untouched paradise near the Himalayan foothills. While we sang our way to Dudhwa crossing, the superabundant fields with farmers engaged in their daily chores,  it was 11 am when we reached the gates of the resort, the  amazingly beautiful property with lush greens. The lodge located in the midst of sugar cane fields, is a  private home built in the 1940s and  offers luxurious accommodations to its guests. As we were welcomed by the courteous staff, we were guided to our rooms which happened to offer peerless accommodation. After relaxing for some time, we embarked upon the exploration of our destination. And oh,  we were off on the safari, needless to say, a very exciting one. The Dudhwa Tiger Reserve is the last remnant forest of the amazing Terai-Ecosystem, a magical mosaic of woodland, grassland and wetland.

As we move past the entry gate on our safari jeep, we were gulped into an enchanted kingdom, guarded for miles by the mighty sal trees. The national  park beholds the vast grassland spreading like a seamless carpet into the adjoining jungles. The driver who also happened  to be our guide drove us into the grassland and thus began our adventure with the cool breeze becoming cooler as we penetrated deep into the forest reserve. The cavern-like canopy of the woodland is awe-inspiring at daytime and spine-chilling as it gets dark. Under the cover of the apparent tranquility, the tigers prowl, cheetals hide, snakes wriggle.

This safari was  booked online and lasted for three hours where we spotted a variety of deer that were grazing in herds. Monkeys making noise and running towards our vehicle were spotted all throughout our journey. While we suddenly saw a group of tourists returning and raising the cry of having spotted the tiger. Whoa, that was all so exciting and our guide drove us to the recommended  spot where  we waited patiently but to no avail as the tiger had probably disappeared into the grass and the greenery. Undampened in our spirits, we continued on our sojourn spotting the colorful wild fowl or the junglee murga as the called it.

The jungle offers  dwelling to many birds of the rarest species including the Indian golden oriole, Bengal florican, stork etc. The breathtaking sight and the scenic beauty of the wild was an amazing experience in itself. The absolutely fresh air and the tranquility of the atmosphere was awe inspiring. This  adventurous journey on the jungle tracks led us to the other natural treasures of Dudhwa National Park: the Wetlands and Grasslands. Gazing upon the crystal clear water of the wetlands added to our delight and ecstasy. Climbing on the machan or the scaffolding used for spotting animals transported us into an altogether different world. Atop the Machan one could see trees, grass and lotus bedecked ponds and lakes all around. The binoculars helped us see a group of huge swamp deer at a distance drinking water at the lake. The best of wildlife: The crocodiles, thousands of winged visitors and majestic birds of prey were all around us with sounds of the jungle resonating in the environment.

The biodiversity and wildlife at Dudhwa Tiger Reserve is incredulous and is inhabited by  a wide species of mammals and birds. The legend of Dudhwa National Park would be incomplete without the mention of the Tharu tribals that still preserves a rich and vibrant culture. Historically, it is said that the Tharus came from Rajasthan after the Battle of Haldighati. While the men stayed behind fighting in the battle field, the women migrated to this region. This is the reason why the Tharu society became  matriarchal society. While the main occupation of the tribe is farming, the tribal community is  known  for their folk roots in music and dance, expert craftsmanship and their impeccable hunting skills. The Dudhwa National Park offers a peep into the culture and customs of this prolific community. We got the opportunity to meet a few women from the community near the jungle who talked to us about how the jungle has been home to them for centuries.

Thus, ended our stupefying safari and we reached the resort for rest and some relaxing time with friends and family.