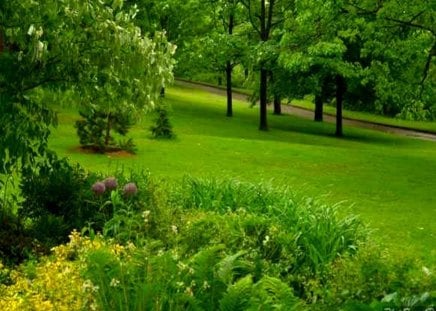 It is well known  that presence of green spaces like parks has been linked to many health promoting benefits including  recovery from mental fatigue and healthy childhood development and also to neighbourhood social cohesion. But, is there any  significant  association between  how green spaces are designed and maintained in a city and the crime situation of the city?

Research studies on this subject were conducted between 2000 and 2015 in Philadelphia, Baltimore and  Youngstown (Ohio). In a study published in 2015 for Youngstown, the treatment lots (greened spaces)  had  lower rates of property crime  like theft, burglary and violent crime. The researchers also looked at crimes in areas  surrounding the test sites  to make sure  the park improvements were  not simply displacing  crime to  nearby areas. The data indicated that rates of crime were indeed falling  in the surrounding areas  and not just shifting location. On the whole, the  study suggested that  cities should revitalize and make green  vacant lots not just for aesthetic reasons  or economic reasons but to fight crimes as well.

When scientists analysed crime statistics in Chicago, both  before and after the construction of  the Bloomingdale Trail, a 2.7-mile elevated  greenway known as  the 606, they found a reduction in crime in neighbourhoods closest to the trail. Researchers compared neighbourhoods with similar socioeconomic conditions and crime rates prior to the  Bloomingdale Trail  installation. The result of the study was published  in February, 2017  in the Journal “Environment and Behaviour”. Kuo and others examined the relationship of vegetation, trees and  grass to crime  in  98 apartment buildings  across Chicago, Illinois, USA. They found that property crimes  and violent crimes occurred less  in areas with taller trees. This was also true of total crimes. The areas with taller trees that did not obstruct visibility  had fewer overall  crimes.  Similarly, a study in Austin, Texas, USA  by Shel Groe  and others  also showed a negative correlation  between greenness  and crimes ,  with the prominent component of greenness  being tree cover. Donevan and others in Portland, Oregan, USA  in their study found that  the crown area of street trees  and the crown areas  of trees  that share the lot  with the home, were associated with  decreased crime occurrence.

Other findings are also similar  in that areas abundant in  tree cover  have reduced crime rates  when compared to similar areas  with less tree cover. The authors explained that  though  it is the crown of tree  that obstructs views  and provides locations  for criminals to hide  and larger trees have higher crowns, larger trees may also  encourage people to spend more time  outside  and, with more  individuals  outside in a community, the probability of  a criminal being observed  increases, thereby  decreasing criminal  activity.

Studies  in New  York City  have shown that  crime rates were lower in widely spaced green spaces  with high canopy trees  and grassy areas, as opposed to paved areas. The collected data  encourages an increase  in green spaces in urban areas. The further from a public park one travels, the higher the prevalence of murders. A similar trend follows instances of rape. For both murder and rape occurrences in Manhattan North , the prevalence of crime  instances decreased  when four blocks or farther from public parks.

Urban greening  can  play a bigger role  in urban planning  to reduce crime in the cities.  This brings more urgency to  cities’ maintenance of greenery  on public land.  It is often the case in urban areas  for property managers, realtors, landowners and architects to remove vegetation  in the name of safety  and management concerns. Vegetation can, however, be retained  and managed to reduce risk. Studies have shown that  open green spaces  that preserve visibility, as opposed to closed green spaces  that limit views, increase  feelings of personal safety , as a person is better able to  detect potential  safety risks. Greater openness is associated with  less perceived danger. However exclusively open green  space  is not necessarily the right design technique.

Broken Windows theory  proposes that  signs of physical disorder  (graffiti , vacant lands and presence of trash etc.) send messages  that the space  in uncared for  and that the surrounding community is not invested, hence criminal activity can  proceed without consequences. Though most of the research about the relationship between green spaces and  crime rates  has been done in the USA, the lessons can be learned with profit and can be applied to Indian cities. This requires a planning of urban green areas by the Development authorities  and urban local bodies. In the light of the above to reduce crimes, authorities in  urban areas may consider implementing one or more of the following  proposals:

1. Enhance the presence of  current trees and green spaces. It   can be  a cost-effective method  to aid in the reduction of crime  than creating new  green areas.  Municipal bodies can  invest in renewing landscaping and current structures  as a means to improve  tree health and  the aesthetics of green spaces.

2. Educate citizens on the need  for trees and green spaces: Educating citizens  can serve to introduce  projects and provide opportunities for participation. This approach provides a platform for  interaction with citizens  while exploring how they can play  a role in the success of  the project. Not only in education  but also in the planning process, the citizens  should be included.  This can also avoid many problems  often associated with  a top-down approach from the government.

3. Provide incentives for home-owners  and residents to support  efforts that increase  the number and condition of  trees and green spaces. This will  increase the likelihood of citizen participation. Incentives may include development incentives, grants, rebates, installation financing,  awards and recognition programmes.

4.  Create partnerships with local  business and industry  to aid in tree  plantings and greening  efforts. Local governments can incentivize  these partnerships  by providing opportunities to  promote businesses, by  giving tax credits or other incentives. The businesses can provide money  for purchasing of supplies, volunteers for labour or individuals to  promote and support  tree-planting and greening. Many businesses actively look for  opportunities  for better community relations.

It may take several years for the trees to grow  and to achieve the desired outcome  of lower and less violent crimes. However, in  areas that have well established trees, proper pruning and care may result in  a more immediate positive result. Obviously, the above steps  do not  in any way  substitute an effective police system, but certainly help in  reducing crime rates.

Fast fashion is fatal for the planet

Vote for environment, nothing less