Sometimes wildlife returns to a city not because people carve out a designated space for them, but because something toxic to them is removed. .. 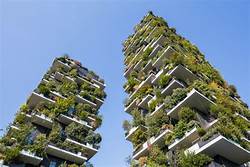 Many cities are challenging places for wildlife, full of people, noise and pollution. But small changes are all it takes to tempt many species to live in the concrete jungle. Urban rewilding projects are tempting nature back into our cities, from creating city butterfly meadows to building unlikely homes for deadly birds of prey.

The middle of London’s hectic West End doesn’t seem like the likeliest location for one of the UK’s rarest birds. There are only an estimated 20-40 breeding pairs of black redstarts in the country. But in recent years, without being artificially introduced into the area, this rare bird has started to make a home in this crowded part of Central London. The black redstart isn’t the only unexpected species of wildlife to start living in conspicuously urban landscapes. Moths, butterflies, woodpeckers and even serotine bats, more commonly found in rural pastures, have also been on the rise in this part of London. It’s a trend growing in strength worldwide. While in New York, peregrine falcons – once nearly extinct in the US, can now regularly be seen diving at breakneck speeds from skyscrapers across the city.

These changes are the payoff of increasing efforts to transform dense urban areas from wildlife dead-spots into attractive, viable homes for nature alongside city dwellers. One new initiative is even trying to get offices to keep beehives. You don’t have to completely redesign a city’s layout to achieve this, says Emily Woodason, a senior landscape architect at the design and planning firm Arup. Sometimes creating pockets of greenery at sufficiently regular intervals is enough to tempt wildlife back into an area. The Wild West End project, involving six of London’s largest landowners, is seeking to create 100 square metres (330 sq ft) of green space every 100m. “It’s an ambitious objective,” says Woodason. “Ultimately the aim is to create a green corridor between London’s parks.”

As well as planning more green areas, many of the landowners are choosing to retrofit existing buildings with green walls or roofs. So far, it appears to be working. Since a baseline wildlife assessment two years ago, several unexpected species have returned to the area, including the black redstart. “One of the types of space created might include rock piles and log piles, which are great at attracting different insects and allow more natural colonisation of species over time,” says Woodason. “Those conditions are perfect for this type of bird.” Attracting rare species back to cities isn’t just “nice to have”, although it does make urban life more varied and interesting. Some of the species tempted back by such programmes are the ones we rely on heavily for food security, such as pollinators like bees and butterflies. Their populations are plummeting globally.

“We realise that planning, development, architecture and industrial design are all complicit in wiping out other species on this planet,” says Mitchell Joachim, director and co-founder of Terreform, an ecological planning and architecture firm. “I am absolutely passionate about trying to restore these habitats in cities, and to instill that in how we plan our buildings.” Sometimes that means planning a giant, eight-storey transparent vertical meadow into the walls of an office building in Manhattan. Monarch butterflies are native to North America but have been disappearing fast since the 1980s because of widespread destruction of milkweed, a plant that monarchs use while breeding. “Milkweed is a highly invasive species, humans don’t like it – it can give you a rash, or take over your beautiful American lawn,” says Mitchell. Building a space for monarchs into the building would be part of an effort to slow their precipitous decline. “It is a sanctuary for monarch butterflies, to breed them, with nurseries for caterpillars and areas for the chrysalises and the adult butterflies,” says Joachim. “They live there for a few weeks and then they’re released.”

To have a real impact on monarch butterfly populations, it will take more than one sanctuary. The most important thing to do is restore the butterfly’s natural habitat – within the city and outside it along its migration route to Mexico – in particular by providing more milkweed. In cities, a roof garden is the obvious place to start allowing milkweed to grow. One such roof garden is planned to sit on top of the butterfly building, which the insects are greeted with when they are released into the open air. But this is something that everyone who owns or rents a property can contribute to, not just the proprietors of large landmark buildings. To make a long-term difference, people need to look past the state of their lawns and leave the milkweed intact.

Sometimes wildlife returns to a city not because people carve out a designated space for them, but because something toxic to them is removed. The pesticide DDT, originally considered a wonder chemical, was used widely in agriculture from the 1940s. It wasn’t until decades later that people discovered it was highly toxic to many species, including humans, and the US’s Environment Protection Agency (EPA) banned it in 1972. Among the worst affected were birds of prey, because the toxin accumulated up the food chain. The US population of peregrine falcons, the world’s fastest bird of prey, was decimated and by 1970 the birds were on the edge of extinction. A group of scientists set up a conservation initiative they called the Peregrine Fund, to try to breed peregrines in captivity until they could be released into the wild. One place that the peregrine falcons thrived turned out to be quite unexpected. “They started to experiment with releasing peregrine falcons into cities,” says Erin Katzner, director of global engagement at the Peregrine Fund. “Not only did it work, it worked really well.”

The skyscrapers provided a habitat that the birds were well adapted to – high up, with sheer drops, with spots to nest far away from potential predators like racoons or foxes. Scientists worked with building owners to create ledges for the birds to nest on. Pigeons and migratory birds provided plentiful food. As pollution of the food chain with DDT declined, peregrine falcon populations in cities soared. “Now you can find them in almost every city across the US, including multiple pairs in Manhattan,” says Katzner. “You can go into downtown New York City and see peregrines flying among the skyscrapers.” Even for birds released into the countryside, there are now many accounts of them making their way to cities of their own accord, because they had become such a good habitat. As well as exciting birdwatchers, urban birds of prey help to keep down rodent populations within the cities.

Urban rewilding initiatives often have multiple levels of benefit – greener spaces make people happier, but they also help solve water drainage problems and prevent flooding, as well as providing a home for pollinators and other animals. But perhaps one of their most valuable traits is to make people feel more connected with nature and be more aware of our relationship with the environment. The long-game is not just to build in green compromises to existing city areas, but to shift what development looks like in a city. Until recent years, urbanisation has meant turning green areas grey with the concrete, asphalt and glass of traditional buildings and infrastructure. That transformation has unsurprisingly ended up being bad for our mental wellbeing, physical health, environment, ecosystems and wildlife. Rewilding is one way to reverse that process: prioritising plants and animals first, and paving the way for the benefits to our health, wellbeing and the urban environment that follow.