The majestic Sibtainabad Imambada, which was no exception to the barbarities of the British, was attacked and occupied by the Sikh troops of the British army on March 13th 1858, on their way to the assault on  Begum Hazrat Mahal and her loyal freedom fighters at the Qaiserbagh... 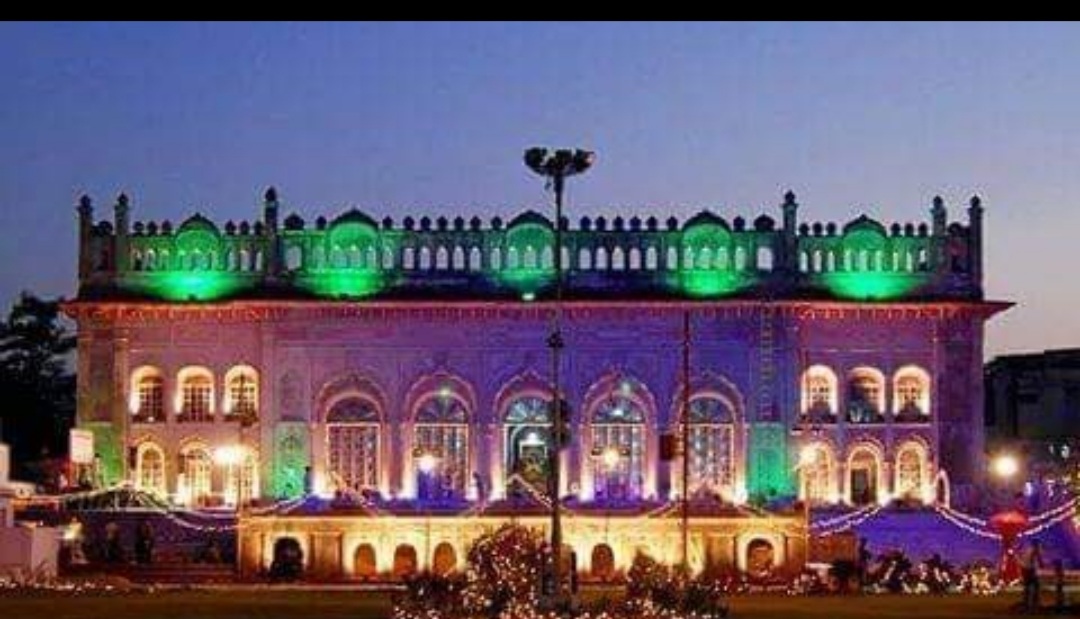 Walking through the historic market place of Hazratganj is every shopper’s delight, every youngster’s favourite hangout and, in fact, every Lucknowite’s weekend bliss- perhaps specially for those who belong to the era of the nineties. This upmarket place has undergone renovations many a times and in today’s date continues with its old-world charm despite the ‘Mall culture’ pervading the historical city of Lucknow. And like any other avid Lucknowite, I remember spending the weekends at the famous Jabbar Coffee shop or the Royal Café with my dear parents. As they say old habits die hard, so my love for Hazratganj and ganjing still continues to be unchanged.

One important aspect of Hazratganj which, however, I never discovered during my younger days was the hidden piece of heritage popularly referred to as the Maqbara behind famous Marksmen restaurant. However, today a travelogue to Lucknow would be incomplete without visiting the Imambada Sibtainabad, the actual name of the Maqbara Hazratganj.

Imambada Sibtainabad, (signifying the names of Hasan and Husain, the grandsons of the Holy Prophet PBUH) which was once in a state of absolute despair, today stands resplendent as a perfect example of restoration and preservation of heritage. The majestic Imambada has a long history which indeed is a story of the rise and fall of a segment of history striving for its survival. Way back in the year 1856, the province of Oudh had been annexed by the British East India Company and Wajid Ali Shah, the last king of Awadh  was exiled to Calcutta the year before the rebellion broke out in 1857. With the military occupation of Lucknow there was a swift and cruel retribution against the inhabitants of the city. The entire layout of the city was transformed. The task of reshaping Lucknow was entrusted to military engineers led by Col. Robert Napier. A large part of the densely populated area around Macchi Bhawan, the traditional centre of the city, was demolished. Nearly two-fifths of the entire city was destroyed and the residents uprooted. One pro English Historian, Munshi Mendi Lai Stated the situation after the British Control- All of a sudden, city demolition started. A typical type of excavators was used. The madrasis, negroes were forced to work in order to carry out the destruction work of walled construction and highrise buildings were excavated; even the foundations. The destruction work continued regiment after regiment. The ground houses of very famous persons were razed using bulldozers.

The majestic Sibtainabad Imambada, which was no exception to the barbarities of the British, was attacked and occupied by the Sikh troops of the British army on March 13th 1858, on their way to the assault on  Begum Hazrat Mahal and her loyal freedom fighters at the Qaiserbagh, that finally led to the recapture of Lucknow. Two companies of the 10th Foot and about a hundred men of the Ferozpore Sikhs formed a storming party, feeble resistance was offered and the troops pressed on to an outlying building of the Kaiser Bagh Palaces. The local hooligans could not withstand the attractions of loot. They stripped the Imambada of everything of value. The horrific plunder of the Imambada Sibtainabad on the 14th of March 1858 is recorded in the History of The Indian Mutiny 1857-1858 Vol II by Col. G.B. Malleson, London, published by William H.Allen and company in 1879. It is ironic that evidence of war was discovered outside the tomb of this man of peace. Renovations of Hazratganj in December 2010 uncovered an enormous 25 kg cannon ball embedded in the soil in front of the Imambada.

In the period from 1858, till the year 1860, the British used Imambada Sibtainabad as a Church. Author Yogesh Praveen wrote in his Lucknownama that Lord Canning on his visit to Lucknow attended the Sunday Mass in the open area of the Imambada. The Monument is surrounded by haphazard and improper constructions from all sides, adversely affecting its archaeological status and grandeur. "The Imambada which is loved and revered had been surely on its way of becoming a lost monument.”

Archaeological Survey of India (A.S.I.) has, done a yeoman's job in restoring part of the main Imambada structure in its control, in the form of a hall with decorated archways, still, lots needs to be done by the concerned stakeholders which include the Archaeological Survey of India, the Wakf Board, the District Administration, the Municipal Corporation and the Lucknow Development Authority, who need to ensure that it is maintained regularly.

Sibtainabad Imambara appears to have been jinxed from the beginning. Its construction, commenced by Amjad Ali Shah Hazrat, could only be completed after his death, by his successor, Wajid Ali Shah, the last King of Awadh. As it had the twin purpose of housing the mortal remains of Amjad Ali Shah, as well as for holding majlis and obsequies related to Moharram, it is commonly known as Maqbara by the general populace. The edifice, although built on a much smaller scale, as compared to Asafi Imambara or Shahnajaf, does not lack in aesthetics or functionality. The building has an imposing façade and is built on a raised platform. There are three halls and the main hall has five beautiful arched doorways with signature Nawabi stucco work. The doorways also have striking stained glass panels. The ceilings and walls are decorated with exquisite stucco work and beautiful chandeliers.

After presenting a ruinous look for several decades, surrounded by shanties, shops and garbage, public spirited citizens of Lucknow came together taking a  commendable initiative for restoring the look and purpose of the Imambara under the leadership of Mohammad Haider, the Mutawwali of the Waqf Sibtainabad Committee. A lot has been done, and a lot remains to be done. So, anyone who visits Lucknow or is a heritage enthusiast must not miss the chance of going to this lovely architectural edifice which is a perfect example of heritage conservation.

To breed or not to breed!

Sustainable environment is my priority

A guest that became permanent member