There were fishes of different kinds and colors, shapes and sizes.  They were moving with us with no fear as if they thought us to be a part of them... 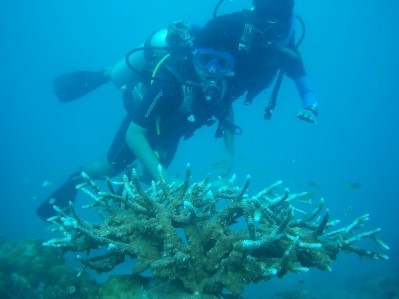 We were in Havelock now, one of the biggest, for me the liveliest of all the islands in Andamans. We woke up in the morning, went to the beach of our resort and saw the sunrise.  That day, my heart was brimmed with joy and excitement and a bit of fear as it was my first time going for a Scuba Dive.  We reached Ocean Dive Center (SH4, Havelock, Andaman and Nicobar Islands 744211), where they gave us a consent letter to be signed, it was as if we were signing up for our life.  Then they gave us our wet suit to change.

We stood on the deck in our wet suits, with oxygen cylinder strapped to our back and two respirators, one to breathe through, the other spare-dangling at our side.  At first, they took us to the shallow and gave us training before we went deep into the sea.  They told us how to equalize our body pressure, what to do if water enters inside our mask and various signs to communicate with our guide. Then, after an hour, we hopped on the boat to go to the middle of the sea. The guide made us sit on the edge of the boat and pushed us back, we did a somersault and went inside the sea.  So far, down in the ocean, the sunlight was a soft diffused glow.  At a certain point, there were huge corals, to which the sunlight was alien. Shoals of fishes were moving across us. That place from the ordinary world above was the Ethiopia of my dreams.  As we went deeper the pressure gradually caused my ears to pump up and it did hurt a little initially, but the training they gave to equalize paid off well. Down there my senses were altered; the sounds were soothing and the light gentle.  It was truly a three-dimensional world; I was as free as a bird in the sky, I could also swoop down towards the sandy bed below.  Down there I was free to turn and move as I wished, the ties of the gravity faded to nothing.

There were fishes of different kinds and colors, shapes and sizes.  They were moving with us with no fear as if they thought us to be a part of them. Everywhere it was festooned with sea vegetations like seaweed, kelp, and anemones.  All these, with coral that rose like Gothic architecture, were entrancing. We saw barracudas circling around us, good corals, parrot fish, clown fish, cleaner fish, and big shoals of fusiliers which entertained us on our way, we also saw Whitebanded Shrimps, Peacock Mantis, Giant Moray, and Manta Ray.  In the great depths, I saw myself as I really am, just another living organism in the vastness of the world.

As we got back to the diving school, we were all tired. In the afternoon, we went to Anju’s Resto Cafe which was just about five hundred meters from our resort.  We saw a lot of people hiring bicycles just outside the cafe, we also decided to hire it for a day. In the evening, we took our bicycles and headed towards the town. Our evening started with tasty gol-gappas and some fresh fruit juice. We then went to a little fast-food shop and had fried fishes with hot tea.  By the time we reached our room, it was dark and almost time for dinner.  So, we decided to go back to Anju’s Resto Cafe and had tasty sizzlers and their very famous salad.

The best part about the trip was that none of our internet data was working.  Initially, it was quite tough for us, but it had a good side too.  It helped us give more time to each other and also discuss our programme, rather than spending more time on smartphones all by ourselves and straining our eyes. There were a few instances where we had to use the internet urgently for some reasons.  We managed to find a cyber cafe not too far from our resort where we had our work done.

We woke up early in the morning at around five and took our bicycles to head to Kala Pathar beach.  It was about 5-6 km away from our resort. The morning weather was pleasant.  There was music everywhere in the forest, the music of nature.  The birds were chirping, cicadas and crickets were buzzing and whistling in the woods.  There were danger signs along the road of crocodiles inhabiting in that area, which creeped us out. As we moved out of the forest, we could see bright open skies and on one side of the road, there was the boundless Indian ocean with different shades of blue reflecting the glory of the morning sun. It was the indication that we were nearing the beach. Within a few minutes we were there by the gate of Kala Pathar clicking pictures of our self-proclaimed victory.  We stayed there for almost an hour and decided to move back to our resort.  After having our breakfast, it was time for us to check out from our resort, we decided to spend the afternoon at Radhanagar beach before boarding the cruise for Port Blair. After having our lunch at a treetop restaurant at the beach, it was time for us to leave for the harbor to take our cruise back to Port Blair.  I really miss the Havelock and wish to come back again. We reached Port Blair at around 7 o’clock and got checked in to our hotel for the night.

It was a lazy morning for all of us, the last day here in the beautiful islands.  Woke up at around eight and got ready. The only thing which was left for us to do was to visit the Cellular Jail and do some souvenir shopping.  We reached cellular jail first. The Cellular Jail is one of the murkiest chapters in the history of the colonial rule in India.  Although the prison complex itself was constructed between 1896 and 1906, the British had been using the Andaman Islands as a prison since the days in the immediate aftermath of the first war of independence. Shortly after the rebellion was crushed, the British sent thousands to the gallows, hung them up from trees, or tied them to cannons and blew them up. Those who survived were exiled for life to the Andamans to sever their connections with their families and their country.

Then it was time for us to leave. Now, even if many months have passed by, the memory of Andamans stays registered in my mind with all the fun I had there. Whenever I have frazzled thoughts in my head, I close my eyes and all I can see is the sunny white sand beach, so calm and pleasant that I dive right in, in the turquoise ocean, hence getting rid of all my hesitations and skeptic thoughts, I open my eyes and find myself in the real world, for now at peace, and all my worries halted for some time!

My doggy is a tigress