Building ‘super’ dams in Himalayan region at cost of life

Building ‘super’ dams in Himalayan region at cost of life

Rather than engaging in an unsustainable dam-building spree, India &China, the major players in the region, would be well-advised to disengage from military adventurism and seek ways of transforming this ‘roof of the world’ into a natural reserve for the sake of humanity... 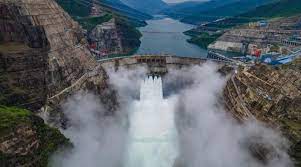 Dr CP Rajendran
The writer is an adjunct professor at the National Institute of Advanced Studies, Bengaluru

In an article published on the website of the Central Committee of the Communist Youth League, China declared that it was planning to build a giant hydropower project as a part of its 14th Five-year Plan (2021-25). It would be built on the Yarlung Zanbo River in the Medog County, a part of the headwater region of the Brahmaputra in the eastern Tibet. The hydropower generation station, after completion, is expected to provide 300 billion kW of electricity annually. The Chinese authorities said the project would apparently help in realizing the country’s goal of reaching a carbon emission peak before 2030 and carbon neutrality of 2060.

As the speculation about China planning to build a “super hydropower station” in Medog county, not far from the Arunachal Pradesh, where the Yarlung-Zangbo Grand Canyon is located started floating around, the Indian counterparts, not to be outdone were quick to reiterate their plans to dam the Himalaya on the opposite side of the border. India is reportedly considering a 10-gigawatt (GW) hydropower project in a remote eastern state.

In this mad rush for one-upmanship, both countries ignore the non-viability of such ‘super’ dams in an area that is geologically unstable. Both for China and India, it is high time that they sat together to deliberate on the consequences of such misadventures in an area where great earthquakes are bound to happen.  In the past 20 years, both China and India have out-competed each other in building hydroelectric dams in this ecologically fragile and seismically vulnerable area. There are two hydropower projects in the works in Arunachal Pradesh on the tributaries of the Brahmaputra - the 600 MW Kameng project on the Bichom and Tenga Rivers, and the 2,000 MW Subansiri Lower Hydroelectric Project. China on the other side of the border has already completed 11 out of 55 that are planned for Tibetan region. All these hydroelectric projects (HPP) grossly underestimate the earthquake vulnerability and overestimate the economic potential.

The region is considered as a global hotspot for hydro-electricity resources, and consequently such projects are being executed in a maddening pace by both the riparian states. But, the long-term economic viability and the adverse impact that these projects would have on an ecologically fragile area has consistently been thrown to the winds. The entire Himalayan region is known to host active faults defined by high seismicity and landslides and glacier lake outbursts are generic to this mountainous topography. About 15% of the great (Mw ≥ 8) earthquakes in the 20th century occurred in the Himalaya. The northeast Himalayan bend has experienced several large earthquakes of magnitude 7 and above in the last 100 years, more than the share from other parts of the Himalaya. With a magnitude 8.6, the August 15, 1950 earthquake on the Assam-Myanmar border is the largest continental event ever recorded.

Killing more than 4000 people, the 1955 earthquake was one of its kind among the earthquakes that caused extensive landslides and rock falls, widespread land level changes, gaping fissures and oozing of water and mud in the Himalayan ranges and the Upper Assam Valley, damming the rivers that were later breached generating flash floods in the downstream sides, seriously silting up of drainage systems. The earthquake was felt over an area of about 0.42 million square miles that comprises parts of India, Tibet, erstwhile East Pakistan and Myanmar. This event gives us grim pointers of what could be expected in the north-eastern bend of the Himalaya if a similar event were to happen in the background of a multitude of super-big dams.

To take a recent example, the 2015 Gorkha earthquake of magnitude 7.8 in central Nepal, though much smaller in size compared to the 1950 event, had resulted in huge losses in the hydropower sector. Nepal lost about 20% of its hydropower capacity consequent to the 2015 earthquake and about 30 projects with a capacity of 270 MW, mostly located along the steep river valleys, were damaged. The cost of physical damage is calculated to be 200 million US dollars.  The studies published in a 2018 paper in Geophysical Research Letters by Schwanghar and others, for example, are quite revelatory on the earthquake-borne damage sustained by hydropower projects in Nepal. The main mechanisms that contributed to the vulnerability of HPPs are found to be landslides, which depend on the intensity of seismic ground shaking and the slope gradients.

Heavy siltation due to giant landslides that are expected in the project sites and headwater region from future earthquake-induced ground shaking will reduce the life-expectancy of such dams. Even without earthquakes, the steep slopes made of soft rocks are bound to slide due to the deforestation and road building – the activities that will get intensified as part of the dam building activities. From these perspectives, the northeast Himalayan bend with deep gorges with numerous earthquake sources is the most unsuitable locale within the Himalaya for giant dams. Another unknown factor is how in the long term the reservoirs with their water load would alter the existing stresses and strains on the Earth’s crust, impacting the frequency of earthquakes and their mechanisms.

The Himalaya is a transnational mountain chain and is the chief driver of the Asian climate. It is a source for numerous Asian river systems and the glaciers, which are now under the threat of degradation and retreat due to global warming, that provide water for billions of people. This legacy of humanity has now become highly contentious with territorial disputes between two nuclear powers - China and India. The ongoing low-level military confrontations between these two countries have led to demands for further infrastructural development on both sides including construction of thousands of kilometres of all-weather roads, much to the peril of the regional biodiversity and indigenous population.

In a recent article in ‘Nature’ by Maharaj Pandit, a Himalayan ecologist says that the Himalaya in recent years has seen the highest rates of deforestation and land-use changes. He suggested that the upper Himalaya should be converted into a ‘Nature Reserve’ by an international agreement and the possibility of a ‘Himalayan River Commission” involving all the headwater and downstream countries needs to be explored. Rather than engaging in an unsustainable dam-building spree, India and China, the major players in the region would be well-advised to disengage from military adventurism and seek ways of transforming this ‘roof of the world’ into a natural reserve for the sake of humanity. Carbon neutrality should not be at the expense of the environment.

Disappearing ponds: Situation as shocking as it looks

Not as simple as rainfall