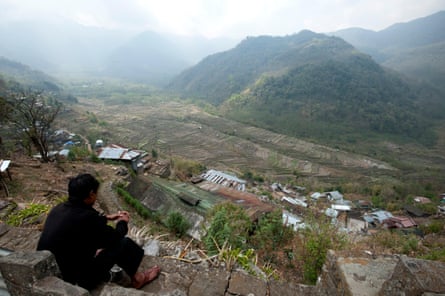 As he looks to the future, Kezhaseria Meyase, a 37-year-old resident of Khonoma, expresses confidence in the youth of the village. “They are well aware of the importance of conserving our forests and wildlife,” he says. For the first time since the creation of the Khonoma Nature Conservation and Tragopan Sanctuary (KNCTS) in 1998, tourism in Khonoma has come to a halt. In 2019, the remote 700-year-old village in the Indian state of Nagaland, near the Indo-Myanmar border, received more than 4,000 visitors. Nearly a fifth of the tourists were from overseas, drawn to Khonoma’s rich biodiversity and conservation success (in 2005, it was named India’s first “green village”).

The 20 sq km (7.7 sq mile) sanctuary, consisting of dense subtropical and temperate broadleaf forests, is the first formally conserved community sanctuary in India. It is home to several vulnerable mammal species, including the clouded leopard, Asiatic black bear and hoolock gibbon; and villagers have recorded more than 300 avian species. BirdLife International recognises the sanctuary as one of the 555 Important Bird Areas (IBAs) in India, and the Blyth’s tragopan, a large pheasant which is the state bird of Nagaland, thrives in the higher reaches of KNCTS. Khonoma, like the rest of the world, is coping with the economic fallout of the Covid-19 pandemic and the lockdown in India, which began on March 25. Visitors stayed away during the peak birding season of March and April. Meyase, chairman of KNCTS, says: “Yes, people from the village providing tourism-related services have lost cash income due to the lockdown. But they are still able to sustain themselves by farming and rearing livestock.” He remains optimistic. “Soon when things normalize and vaccination comes, people from neighbouring villages and from within the state will start visiting.” Dismissing concerns about hunting in the sanctuary during the lockdown, Meyase adds: “As long as there is no free movement of people, the sanctuary is safe. Once the lockdown lifted, the Khonoma Youth Organisation, which is responsible for monitoring the sanctuary, have restarted their surveillance.” A steep fine of 20,000 rupees (£210) for any person caught hunting in KNCTS, as well as Khonoma’s long history as a village of fierce warriors, serve as deterrents to any potential poachers, he adds.

Khonoma’s residents belong to the Angami people, who have lived off the forest for centuries, with hunting being a sacred cultural practice. In the early 1990s, following the mass slaughter of Blyth’s tragopans by villagers over the Christmas period, a few of Khonoma’s conservation-minded elders began campaigning for a protected area. They also recognised that conserving the forest, which is a rainwater catchment area, would secure water for the village and for the rice terraces in the valley below. Their sustained efforts bore fruit when the Khonoma village council passed a resolution for the creation of KNCTS in 1998. The hunting and logging ban was soon extended beyond the sanctuary, to include the entire village. To ensure that the men wouldn’t return to hunting, they were recruited as forest wardens for three years and paid a salary via a grant from the Gerald Durrell Memorial Fund. Women, who had traditionally foraged in the sanctuary for fruit and vegetables to sell, were banned from doing so. Vitsokhono Pier, 35, who owns a plant nursery in Khonoma, says: “Women turned their attention to other income-generating activities like running a homestay or maintaining a nursery. Poinsettias are in big demand before Christmas.”

The initial trickle of tourists to Khonoma led to the opening of the first homestay – homes offering accommodation to paying guests – in 2006. There are 12 homestays in the village today and before the lockdown 20 people were employed as guides. Several more made handicrafts while others provided taxi services. The cash earned from tourism enables these families to buy groceries, pay for their children to go to school and meet other household expenses. According to Tsilie Sakhrie, 77, one of the village elders instrumental in the formation of KNCTS, about 100 (out of 600) families in the village have benefited from the tourist trade. But despite the lockdown and subsequent loss of income from tourism, the village continues to have a high level of food security.

Khonoma is known for its sustainable agriculture, and takes great pride in the fact that it has been self-sufficient since ancient times. Paddy terraces are positioned at the base of surrounding hills and the fields are irrigated by nutrient-rich rainwater that flows down the slopes. More than 20 rice varieties are grown in the village. “In addition to rice, we also grow a variety of grains like millet, corn and Job’s tears,” says Kevikelie Pier, 52, a teacher at the local government school. “And our livestock can last us for at least a year.” Produce such as squash, pumpkin, carrot, cabbage, potato, mustard, ginger, garlic and king chilli are also grown in the village, in home gardens and rotating, shifting cultivation plots. Vegetables are also bartered with neighbours. Following the creation of KNCTS, several villages in the state began to emulate Khonoma’s conservation efforts. Village elder Khriekhoto Mor, 64, says: “Today, there are over 700 community-conserved areas (CCAs) in Nagaland, though only a handful are as actively conserved as Khonoma.”

In November 2014, the Nagaland Community Conserved Areas Forum (NCCAF) was formed with 22 members to facilitate the exchange of ideas and strengthen the conservation movement in the state. Mor currently serves as chairperson of NCCAF. Khonoma’s conservation success did, however, create an unforeseen problem for its residents. With the increase in wildlife populations, animals began to venture out of the forest and destroy crops. Wild boar and porcupines would dig up vegetable patches while large flocks of birds such as munias and parakeets attacked grain crops. Most of Khonoma’s residents, who are subsistence farmers, were badly affected by this loss. To manage the situation, the KYO was empowered to issue a three-day hunting permit to a farmer requesting to get rid of a nuisance animal. The permit is strictly limited to the area of the farmer’s land. Thirty such permits were issued in 2019, ensuring villagers remain on board with the conservation measures.

More than 20 years since the formation of KNCTS, it remains a safe haven for a multitude of rare species. Vitsokhono Pier, who has been visiting the village’s forests since her childhood, says: “When I went into KNCTS the last monsoon, I was happy to hear the call of the Blyth’s tragopan at several different places. I also saw the footprints of many animals in the mud.” Despite the pandemic, village leaders remain hopeful that future generations will continue to focus on conservation and sustainable development. “I’m sure our young people will do an even better job of protecting the sanctuary,” says Meyase.