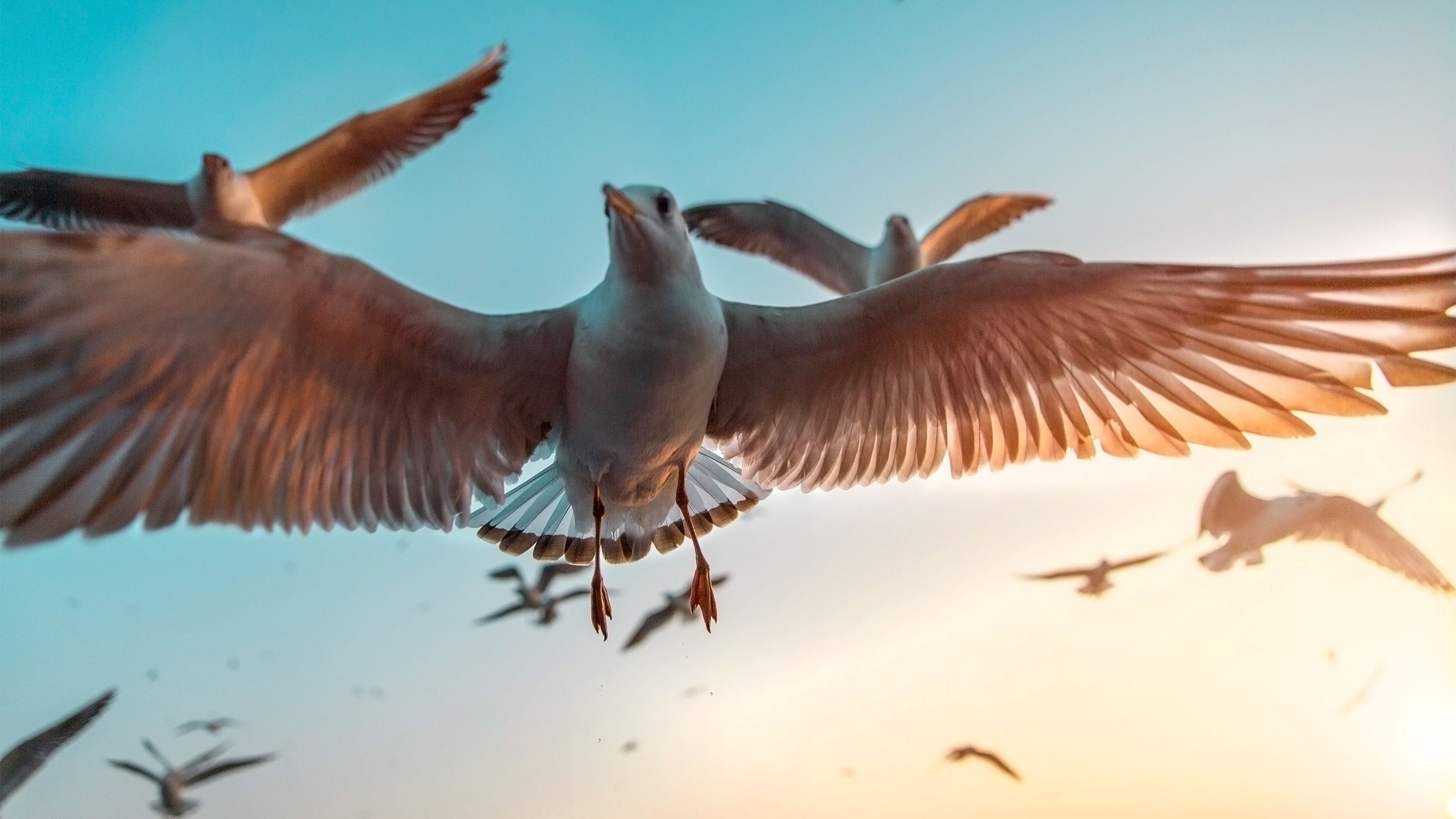 When it comes to climate change, University of Wisconsin-Madison forest and wildlife ecology Professor Ben Zuckerberg says birds are the proverbial canary in the coal mine. They are both responsive and sensitive to changes in the environment, including the extreme weather events associated with a warming planet. However, not all birds are the same, and not all weather events have the same impact. How do different bird species respond to extreme weather events that occur for different amounts of time, ranging from weekly events like heat waves to seasonal events like drought? And how do traits unique to different species -- for example, how far they migrate or how commonly they occur -- predict their vulnerability to extreme weather?

To answer these questions, ecologists would traditionally observe a small number of bird species at a few sites over a few years, and then draw general conclusions. However, Zuckerberg and UW-Madison postdoctoral researcher Jeremy Cohen, along with Daniel Fink of the Cornell Lab of Ornithology, had more ambitious goals: they looked at 109 species across eastern North America over a 15-year period, and integrated this information with fine-scale satellite temperature and precipitation data. In a study recently published in the journal Global Change Biology, the researchers show that not all birds are equally vulnerable to the effects of extreme weather resulting from climate change. As the planet warms, some species will adapt while others may struggle without conservation measures. The results of this study could help conservationists target their efforts to vulnerable species, as well as locations where extreme weather events are predicted.

The researchers used data from eBird, a global citizen-science initiative where bird enthusiasts submit checklists of bird sightings online. These checklists include which species were seen, how many, the location and time, and other observations. The researchers compiled more than 830,000 of these checklists and integrated each one with weather data summarized over the week, month and three months before the observation was recorded. They relied on advanced computing to manage this large amount of information. “The study we did would not have been remotely possible without data science,” says Cohen. The emerging field of data science involves the study, development or application of methods that reveal new insights from data. After controlling for this noisy data, the researchers observed that some species are less sensitive to extreme weather, and populations are not equally exposed to its effects because some geographic areas are warming faster than others. When it comes to heat waves, Cohen notes, “long-distance migrants were not super affected by really hot periods. They winter in tropical environments and should be tolerant of heat.” However, resident birds and short-distance migrants such as robins and red-winged blackbirds responded negatively to heat waves, with their numbers sometimes declining 10% to 30% over several weeks.

As for drought, commonly occurring species like crows were more resilient than rare birds, particularly if the drought was severe and long-lasting. “Rarer species have more specialized habitat and food requirements -- this is a general rule in ecology,” says Cohen. “More common species usually have more options. If habitat quality declines due to drought, a generalist can go somewhere else.” Cohen says this is the first large-scale study, spanning half a continent, to look at how birds respond immediately after weather events. Because of the scope of the project, conservationists can better understand how many different bird species are likely to be affected by climate change, and mitigate some of the negative effects. “If birds are truly winged sentinels of climate change, the greater likelihood of drought, flooding and extreme temperature conditions like heat waves will have significant consequences. We need to think about how we help species adapt to climate extremes,” says Zuckerberg. The study was funded in part by the National Science Foundation and the UW-Madison Data Science Initiative.

A team of researchers from the University of Hawaii (UH) at Minoa School of Ocean and Earth Science and Technology (SOEST) identified a global tendency for future sea levels to become more variable as oceans warm this century due to increasing greenhouse gas emissions. Sea level variability alters tidal cycles and enhances the risks of coastal flooding and erosion beyond changes associated with sea level rise. Sea level rise is occurring as Earth warms due to two main factors: melting of land-based ice such as glaciers and ice sheets, and the expansion of seawater as it warms- termed thermal expansion. Previously unknown was whether the rate of thermal expansion, which accelerates with warming, will also affect the variability of sea level. In a study published in Communications Earth & Environment, the team led by Matthew Widlansky, associate director of the UH Sea Level Center, assessed future sea level projections from global climate models. The team found that while future sea level variability changes are uncertain in many locations, nearly all of the 29 models they analyzed agreed on an overall tendency for the variability to increase on seasonal-to-interannual timescales. “Whereas it is well understood that the rate of global mean sea level rise will accelerate with future warming, in part due to the oceans expanding faster at higher temperatures, it was previously unexplored how this nonlinear thermal expansion property of seawater will affect future sea level variability,” said Widlansky. In places where changes due to ocean thermodynamics and other climate variability processes align, the team found the largest increases in future sea level variability. Coastal flooding occurs increasingly often due to a combination of slowly rising sea levels and ocean variability. The new findings therefore further emphasize the importance of sea level monitoring and forecasting. “Forecasting can potentially provide alerts months in advance if sea levels are likely to cause tides to be more extreme than otherwise expected,” said Widlansky.

Coral reef environments are typically low in naturally occurring nutrients such as nitrogen and phosphorus compounds. But ocean currents passing by can bring in a concentration of nutrients from elsewhere. Similarly, nutrients from human-made fertilisers and stormwater runoff enter reefs from adjacent coastlines. Lead author Dr Thomas DeCarlo from the King Abdullah University of Science and Technology (KAUST) says corals are sensitive to high levels of nutrients. “As the climate warms, mass coral bleaching could occur as often as annually within this century. In our study, we found that already heat-stressed corals exposed to excess nutrient levels were even more susceptible to bleaching,” Dr DeCarlo said. The study suggests ecosystem managers can reduce the impacts of coral bleaching by implementing strategies to reduce nutrient stress in areas subject to thermal stress. Co-author Professor John Pandolfi from the ARC Centre of Excellence for Coral Reef Studies (Coral CoE) at The University of Queensland says this and previous studies, including on the Great Barrier Reef, related coral bleaching to combinations of heat and nutrient stresses. “Our results provide a roadmap for coral reef conservation efforts to be at their most effective. We suggest oceanographic processes should be included when deciding when and where to allocate resources or protection,” Prof Pandolfi said. Using the skeletal cores of long-living corals, the authors studied the past few decades worth of bleaching events in the Red Sea. They found the reefs historically suffered severe bleaching only when high sea surface temperatures were coupled with high nutrient levels. The Red Sea was chosen as a study site as it is one of the only marine environments where the effects of summertime nutrients and heat stress are independent of each other: only one area has a single major source of nutrients in the summer, when a water mass brings nutrients to the surface through a process called upwelling. Previous field tests on the role of nutrients in coral bleaching were otherwise difficult: nutrients and temperature often co-vary in the ocean, making it difficult to disentangle their effects. Nutrient loads are also difficult to measure in the same way sea surface temperatures are, via satellite. “Our research suggests that projections of coral reef futures should move beyond solely temperature-based stress to incorporate the influence of ocean current systems on coral reef nutrient enrichment, and thus susceptibility to bleaching,” Dr DeCarlo said.