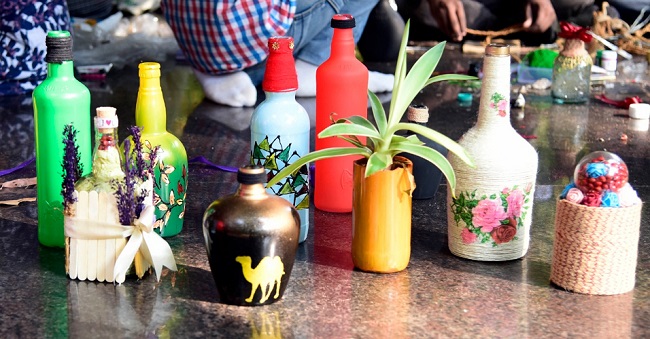 She turns bottles into pieces of art

It is a common notion that environment concerns can be a pastime or a hobby and not a profitable profession, especially in an urban world. However, every commercial activity need not deprive Mother Earth of its flora & fauna, says Aparna, a student, who has come up with ‘Quppi’, an idea to rid the Ashtamudi Lake in Kollam of the many waste materials cast on its shores…

Q: How did this idea come to you?

The idea of Quppi came to me on the long stretch I travelled every day to reach Kollam town from home in Munroe Thuruthu, an island 28 km away! There would be so many bottles on the way, especially on the banks of the Ashtamudi Lake. I began collecting the pretty ones and bringing them home. I have always liked to paint and draw and this is what I did on the bottles. They became decorative. This became a habit. Every day I brought five or six bottles home. I’d carry extra bags and sacks to carry these and my mother began to worry – what will people say of a 22-year-old picking discarded bottles from the road? But when I started posting pictures of the bottles I converted into beautiful decorative pieces and people began asking me about them, wanting to buy them, the family too lent support.

Q: How did it turn into an enterprise?

What began as a hobby got a deeper meaning when I realised that in one way this could reduce the wastes accumulating on the sides of the beloved Ashtamudi. If more people joined and more bottles got picked up and converted into something useful, it could really make a difference! I put up a Facebook post announcing a meeting of those who would like to take the waste converted into ‘a new form’ back home with them. Sixteen people I had not met before turned up at the meet. With gloves covering their hands, they picked up all sorts of waste material that could be upcycled – bottles, thermocol, plastic covers, disposable cubs, nylon clothes – and brought it to my home. More materials came from the townsfolk who heard what was happening and wanted to help. We spent hours cleaning the materials we collected. Cleaning was the toughest part! With a little team, I then put together a small awareness programme at the Adventure Park: College students, teachers, employees of the health department, working folk – all came to attend it. The upcycled objects were exhibited and some of these were bought too.

Q: What is your motto?

We often spend money to buy craft from the shop when instead we can convert such waste materials into something useful. I was mocked so much for collecting waste from the road. It is that attitude that should change. It is not always decorative pieces. Plastic bottles, for instance, can be converted into a piece of furniture, like a stool. There are many ideas being shared.  One idea is to create shades or shelters – some sort of roofing – with plastic bottles in bus stands and other places. But we will need more raw materials for it. Quppi is turning out to be bigger than I expected. There will be more programmes like these now. The idea is to take it to as many people as possible. It has become such a big part of my life that my friends call me Quppi these days. Kuppi in Malayalam means bottle.