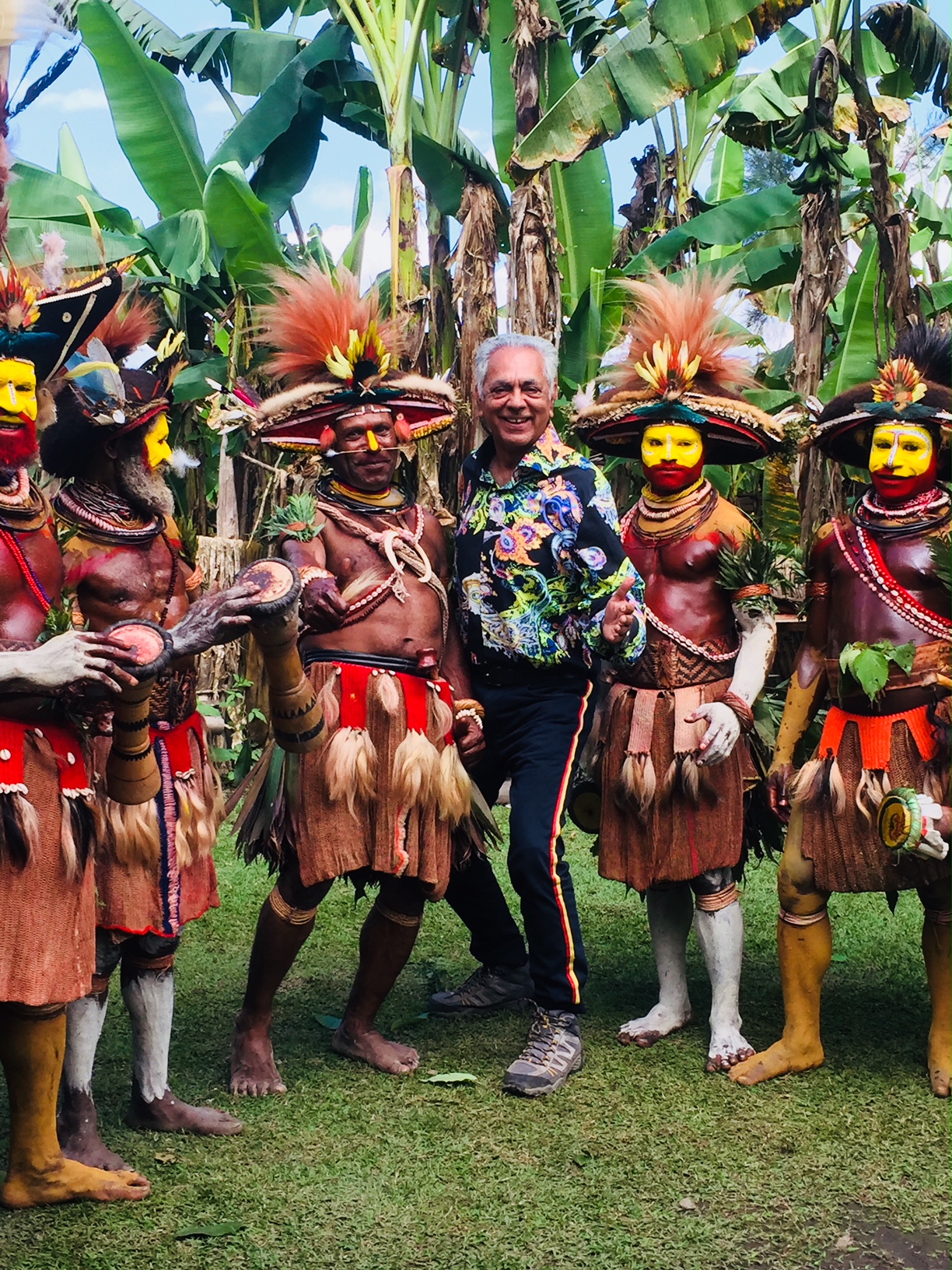 Islands in the Sun

South Pacific was where we were headed to. We chose Papua New Guinea. It was the largest of the islands in the Melanesia, Polynesia, Micronesia group; we would not be confined to the beaches, coral reefs, snorkeling. We wanted to go to the indigenous groups with the rainforest, the vegetation and the natural wonders as well. We were going via Cairns in Australia, famous for the Great Barrier Reef.  From there on to Port Moresby, the capital of Papua New Guinea. From the plane I could see embedded in the Pacific Ocean 900 islands of different sizes. They continued on their colourful journey for 2300 km, attracting tourists from the world at large, including myself.

Whenever we headed to countries in Africa and the Far East, we were informed of the dangers- locations where strife had broken out. We were told to abandon our trip to Timbuktu as in war torn Mali, the northern part was not safe. Johannesburg was not safe; the Amazon forest... We had not been expressly forbidden to visit Papua New Guinea.

In the afternoon Mark the guide and John our driver took us around Port Moresby. The Parliament building was imposing. Eileen who showed us around was full of praise for the New Zealand architect who had designed it and for the local talent that had created the totem poles. I could not, though, get the significance of the city being divided into miles. We travelled from mile 2 to 3 to 4 and 5. Our hotel was on mile 6. The city went up to mile 17. At mile 5 we saw the stilt housing, the stilts submerged in the sea. This was the poorer section of the town, equivalent to our slums. After stopping for a day we took the Air Niugini flight to Mount Hagen in the Highlands.

Tony and Webster were waiting for us with the hotel van and as we drove through the Western Highlands I realized why we had chosen to spend the best part of the PNG trip in this part of the Pacific Island: Snorkeling, deep sea diving, not for me. Take me to the rain forest I had said. And here I was driving through lush vegetation with splashes of all shades, brightening the dark green. We left the township of Hagen nestled in a valley, and continued to climb. Our hotel was at a height of 7,100 ft. In the wilderness this elegant hotel with all the trappings of a sophisticated life… I had not quite bargained for that. Neither did I wish it. But here I was again in a fancy hotel where Mick Jagger had stayed. We had got off at Vincent’s house to view orchids. But the surprise was the pigeons kept in a big wire cage. Their girth was considerable, bigger than a duck, almost like a peacock, they moved agitatedly when we went to met them. And the plumes on their grey neck were like shimmering blue lace. Their stately presence, the tints of colours on their feathers and proud bearing set them apart – they matched their name, Victoria Crowned Pigeon.

In contrast, the Bird of Paradise – there are over 30 varieties in PNG – the Reggiana paled in comparison. She fluttered from one end of her cage to the other, refusing to settle down so that we could not get to know her. I spied a grasshopper, a blue butterfly and a large spider and was spending time with them when our guide Michael drew attention to the varieties of wild ginger: they presented indeed a dramatic viewing – every shape and size, triangular, cone shaped, round and long – all had pulpy exteriors and gleamed in the afternoon sun. Vincent had many types of flowers too in his tropical paradise: poinsettia, amaryllis lilies, patience, dahlias, cosmos and a range of bird of paradise flowers. But the ginger plants kept getting our attention. The display of flowers was no doubt splendid; the ginger varieties were the scene stealers.

In the next village we witnessed the dance of the Huli Wigmen. Their faces were coloured in striking yellow, white and red. The yellow and white paint is obtained from clay, the red from fruit (and now they have begun to use paint). The wig is made from the hair of the dancers; the hair is collected over the years. On top of the wig, ringed with possum fur, the dancers wear a head-dress which has feathers from the Bird of Paradise, the Cassowary and the Ribbon Tail. The skirts are made of grass/vegetation, and they have a tail made of leaves sticking out like that of a bird. On the skirt hang pig’s tails; as pigs denote wealth, the more the tails, the more wealth the dancer possesses. The Cassowary’s bone forms the dagger, the Hornbill’s beak, part of the adornments. And the Huli Wigmen dance the dance of the Bird of Paradise, the male one when he is attempting to woo the female. The Wigmen begin their training early. A boy of 14 is sent to the wig school where he is intensely trained for 18 months, yes to learn to make wigs as well as to dance. During the August and September festivals the Huli men’s wig dance lasts for four hours at a stretch. For us, they stopped dancing after a couple of minutes. And the steps were not that intricate. A few jumps to the left, a swing of the legs and that was about it. I wondered what the 18-month course taught the neophytes.

The Mud Men in Pogla village, to which the South Koreans – “not the Korea that has the bomb” – and we were taken next, gave all of us a bit of a scare. For we were intent on watching two large topless women work at bunching together leaves to light a fire, we heard clicking sounds and suddenly men smeared in white mud wearing huge scary masks descended on us; their long nails – made from bamboo sharpened to a fine point – pointing at us. Their dance was not one of celebration, exhibiting joy, but one that demonstrated aggression. The topless women working on lighting the fire began to wail. And then ran away. I wanted to follow them, but controlled myself as I saw that while the Koreans were scared they held their ground. Priya was busy taking photographs. As suddenly as they had descended on us the Mud Men stopped their antics, took off their masks and smiled shyly at us.

The story goes that a small tribe was living on rich lands. A bigger and more powerful group coveted these lands and waged war, chasing them away. The mud men wanted their land back; after cogitating they came up with a solution. They painted their bodies white, made clay masks and one night hid in the grave yard. At night while the women were preparing a fire, they came out, all ghostly wearing their masks, and frightened the women and the villagers into fleeing. They then reclaimed their land. Papua New Guinea has some 312 tribes scattered all over and 800 languages. Some tribes remain uncontacted even today. There are no roads so contact is by chartered flights. There is a huge tribal festival in Madang in winter where they showcase their traditional customs.  That is where one needs to go. For us, this trip had its fascinations that were etched on our memory forever. – All pics by Priya Sen