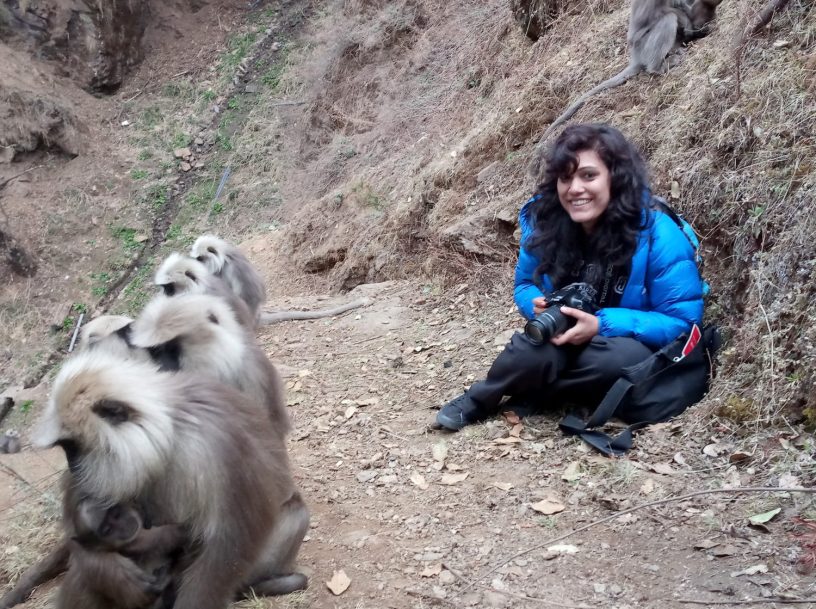 Himani Nautiyal is a Primatologist who has been studying ecology and behaviour of the Central Himalayan langur (Semnopithecus schistaceus) at different altitudes for the past four years from funds granted by Rufford foundation, National Geographic Society, Leakey Foundation and Kyoto University Japan. She is interested in the behavioural ecology of primates and human-non human primate interconnections in the higher Himalayan regions …

Q: How did you take up such an offbeat and unconventional career?

Born in one such little village of Rudraprayag, surrounded by forests, I grew up in awe of nature – my childhood laid the foundation stone for my attachment to the wild. And my childhood fear of the unknown was transformed into curiosity for the new. It is the Himalaya that gifted me my interest in wildlife. To pursue this passion, I took up Forestry for my B.Sc. degree and was gradually drawn to animal behaviour, especially that of primates.

Q: Tell us about your work.

Drawn by fond memories of my childhood, I always wanted to return to work in a remote village of the Himalaya. And there could be no better option than Mandal, a sleepy little village at the base of a steep valley, leading towards the Rudranath peak of the Garhwal Himalaya. It is here, in Garhwal in 1974, that the local women blessed the world with the ‘Chipko Andolan’, the non-violent resistance against the timber mafia, through the act of hugging trees. Steeped in history and representing one of the many villages that skirt the fringes of the Kedarnath Wildlife Sanctuary, Mandal proved to be an ideal base for my field work. An Indian Academy of Science fellowship gave me the golden opportunity to study central Himalayan langurs and to understand the interface between them and humans, under the guidance of the highly-respected primatologist, Prof Anindya Sinha. I started my research in langur behaviour in two different habitats, one inside the Kedarnath Wildlife Sanctuary and the other close to Mandal village.

Q: What is so peculiar about the Himalayan langur?

The central Himalayan langur Semnopithecus schistaceus is among the least-studied primates in the world and there is very little knowledge about their behaviour and ecology. My preliminary study lasted just two months, which was not nearly enough time to start to unravel the mysteries these primates hold. I yearned to learn more about their behaviour across the broad altitudinal range of the Himalaya. Opportunity smiled on me in the form of a grant from the Rufford Small Grant Foundation and I got to study, in depth, the central Himalayan langur, the only primate species found up to an elevation of 4,500 m. in the Himalaya. The goals for my current study are to find the different strategies these langurs use across their wide altitudinal range (1,500 to 4,500 m.) to survive in these harsh environmental conditions.

Q: Why is it so important to study them?

The Himalayan climate is altering rapidly due to the effects of global warming and it is important to learn how these primates adapt themselves to unpredictable weather over the long-term in order to know how to conserve this species and its habitat. To make matters more complex, the people living in these remote Himalayan villages, like the one where I grew up, are facing problems of crop raiding by langurs. Because these villages are located on the periphery of the sanctuary, human-wildlife conflict is quite high. The Himalayan black bear, wild pig, rhesus macaque and central Himalayan langur are the species primarily responsible for crop damage. Villagers are also losing their cattle, sheep and goats to leopard predation. Though agriculture is the primary form of livelihood in the region, farming alone is not a sustainable source of income, so it is supplemented by the sale of milk. Due to the need for fuel and fodder, women, from the ages of eight to 80, regularly venture into the furthest reaches of the forest. Conflict between humans and bears is increasing alarmingly – and lives are being lost in the form of people, livestock and wildlife in the bargain. To better understand langur and human interaction and to mitigate these problems, I am interviewing local people in search of new ways to deal with this escalating issue.

Q: How does your work benefit the society?

As I interacted with the villagers of Mandal valley and studied the langurs who share natural resources with them, I discovered that oak Quercus leucotrichophoru was a key factor in the increasing conflict. To learn more, I delved into all available literature on the subject and found oak to be the ‘Kalpavriksha’ of the Garhwal Himalaya. Oak is the dominant species in the region, and local people living in remote villages are dependent on this tree for fuel, livestock fodder and as material to make agricultural equipment. Remote sensing shows that the forest cover surrounding villages in the Garhwal Himalaya has been degrading rapidly over the past few years. So here is the big question, how is this related to the increase in crop raiding by langurs?  As a primatologist, I have studied the feeding ecology of the langurs that live near the villages in Mandal valley. I found that the oak is the only tree used by the langurs as a sleeping site, and they use only particular oak trees within their home range for this, habitually using the same sites night after night.  Occasionally they will also sleep up on the cliffs, but they will use no other tree species to sleep in. Oak acorns are also a very important source of food in winter when the langurs deliver their young, and therefore are in need of a good diet to nurse their babies. A reduction of oak trees in the surrounding forests attracts them towards the village in search of trees for food and sleeping sites. They have started using the oak trees which are inside the village, and this leads them to a nutritious and easy food resource – crops from the agricultural fields. Availability of sleeping trees and abundant food in the form of crops works like a magnet – attracting langurs to villages.

Q: How important are the findings for ecological balance?

As researchers, we are the ones who best know the habits of our study species. And with increasing engagement with local communities, we also learn about their basic needs and the problems they face due to wildlife conflict. Instead of excluding the locals from research, I feel that engaging with them and understanding their perspective can yield positive results. There’s no doubt that the forest degradation that is driving the langurs to villages is spurred by humans, but humans can also resolve this conflict. Rather than just criticize communities for poor resource management, it will be mutually beneficial to both wildlife and people if researchers outline solutions to peaceful co-existence. Sometimes, just planting a few trees that are important to the lives of our study species can make a big difference. Like in the case of Mandal valley, I found that the Himalayan Cherry Prunus cerasoides is a favourite food of the langurs. Unfortunately, there are only five or six of these trees inside their territory. The best solution seems to be to work with the local community to restore the langurs’ wild habitat to its past glory. The communities are the guardians of these forests, and once they understand the benefits of restoration ecology, I am certain that they will partner with us on conservation initiatives. I have already started to apply this strategy at my field site, with the assistance of my villager friends, to try and effectively mitigate the conflict they are facing with langurs. Ultimately, as humans, we have the prime responsibility of conserving the resources we need and restoring the nature that we destroy.