A bench headed by Chief Justice N V Ramana directed that the suggestions received should be considered by an expert group constituted by the Commission... 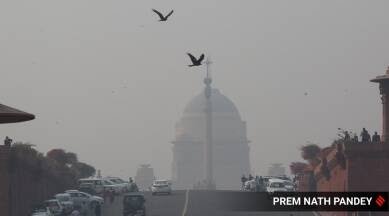 The Supreme Court has asked the Commission for Air Quality Management (CAQM) to invite proposals from the general public and experts for a permanent solution to air pollution woes in the Delhi-NCR region. A bench headed by Chief Justice N V Ramana directed that the suggestions received should be considered by an expert group constituted by the Commission. The bench, also comprising Justices D Y Chandrachud and Surya Kant, was hearing a plea seeking measures to alleviate Delhi’s pollution. On the previous date of hearing, the Supreme Court had asked all those who had approached it with applications seeking various reliefs in respect of the restrictions imposed by the directions of the Commission to approach the Commission itself. Solicitor General Tushar Mehta informed the court that deliberations were held with all those who had filed applications. Companies manufacturing life-saving equipment were allowed to use diesel gensets and dairy and medical manufacturing were also allowed, he said. He added that as far as industries were concerned, they were allowed for eight hours, but by their nature, some of them had to operate continuously.

“So, we have limited it to five days a week and staggered it further,” Mehta said. Mehta said thermal power plants which were shut down continued to be so but more would not be shut as discussed with the power ministry. All hospital constructions are permitted and for the others, only interior works were allowed. On other constructions, the commission would take a call later, he submitted. Mehta said there was continuous inspection by flying squads. He added that there was a committee for long term solutions with NEERI (National Environmental Engineering Research Institute) experts so that a knee-jerk reaction was not needed every year. Ahead of the hearing, the Commission had filed an affidavit in the court informing it that after considering representations from several quarters, it had decided to lift the ban on certain industries. Milk and dairy processing units in the NCR have been permitted to resume 24×7 operations, industries manufacturing medicines, drugs and life-saving equipment have been allowed to resume full-time operations. Paper and pulp processing industries can work five times a week while paddy, rice and textile industries have been allowed to operate five days a week. The Commission said it had also decided that industries that were closed due to failure to switch to piped natural gas could now operate eight hours a day. Power plants had been allowed to operate keeping in view the demand after the power ministry said that existing plants would not be shut anymore. Even the six plants located within the 300 km radius of Delhi that were shut to control pollution could not remain closed. Taking note of the affidavit and the submissions, the bench adjourned hearing in the matter till the first week of February.

The National Green Tribunal’s Principal Bench, New Delhi has disposed of an application filed by the State of Goa seeking an extension of six months to finalize the Coastal Zone Management Plan (CZMP) by six months instead of the lapsed deadline of August 31, 2021. The state had sought extension till February 28, 2022. The bench, comprising Justice Adarsh Kumar Goel, Justice Sudhir Agarwal, Justice Brijesh Sethi and  Expert Member Nagin Nanda, noted: “There is breach of mandate of finalizing CZMP as per CRZ (Coastal Regulation Zones) Regulations, 2011 for the last 10 years, causing failure to regulate the matters as per law, to the detriment of environment. Having regard to the long delay which has already taken place, we see no justification for granting the extension sought. The State cannot go on in a leisurely manner without concern for its duty.”

The bench directed: “If CZMP is not completed even up to 31.12.2021, the concerned Secretary of State of Goa will not be entitled to salary from 01.01.2022 till the default continues.” The direction was issued in the light of an earlier direction in order dated 27.11.2019, which remains not complied with, in view of the further extensions of time granted earlier, as above. The Original Application was filed on 19.05.2015 with the grievance that there was rampant degradation of coastal areas in the country in absence of effective regulation. Important step required for such regulation was finalization of CZMP. Vide order dated 03.05.2017, the Tribunal directed the MoEF&CC (Ministry of Environment, Forest and Climate Change) to file an affidavit as to why CZMP for different States was not being finalized. The Tribunal also issued notice to 13 coastal States and UTs concerned. The matter was then considered on 31.05.2017 and it was noted that CZMP was required to be finalized in terms of the CRZ Regulation, 2011. It was observed that even though six years had passed after the said regulation were notified, CZMP had not been finalised. Accordingly, a direction was issued that MoEF&CC may call meeting of the concerned coastal States within two weeks to plan finalization of hazardous line as well as Notification of CZMP.

Previously on 14.11.2017, the Tribunal directed all the concerned States to state when their State Plans will be finalized by the Ministry. On 22.11.2017, time was sought to file CZMPs by different States and the Tribunal granted extension upto 30.04.2018 and further three months’ time to the MoEF&CC for approval to the fixation of hazardous line and CZMP On 27.11.2019, the Tribunal considered the application for extension of further time with the following observations:-“Even though there is no justification for further extension in view of huge unexplained delay for the last more than one and a half year after expiry of date fixed by this Tribunal, as a last resort extension is granted till 31.01.2020 subject to the condition that the concerned Secretary of the State of Goa will not be entitled to draw salary from 01.02.2020, if there is a default, till compliance. We further direct that in view of huge delay having adverse consequences further steps be expedited by other concerned authorities. National Centre for Sustainable Coastal Management (NCSCM), Chennai may take further action expeditiously but within three months thereafter ie. 30.04.2020. Thereafter, the MoEF&CC may issue necessary notification at earliest but within one month thereafter ie. by 31.05.2020. Delay may call for coercive measure under Section 25 of the National Green Tribunal Act, 2010 read with Section 51 of CPC.” Inspite of above, CZMP was not finalized. Further extension was sought by way of M.A. No. 55/2020 on the ground that delay was being caused by the NCSCM.

Why should I socialize my puppy?

‘We must empower women for sustainability’