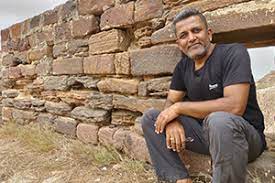 Varad Giri is credited with the rediscovery of the Jeypore Indian gecko after 135 years and has described till date, 30 new species of amphibians and reptiles from India. He is also credited with the discovery of the first Asian species of amphibians that bear live young. Apart from these achievements, he has also inspired world-famous colleagues and students to name two newly discovered species after him – the snake Dendrepahis girii and the gecko Cnemaspis girii. Having trained and worked at the iconic Bombay Natural History Society (BNHS) for over 10 years, he has brought his skills to National Centre for Biological Sciences (NCBS), Bangalore where he currently works as a post-doctoral fellow…

Q: What is your current work responsibility?

My current work not only includes the establishment and organisation of the herpetology section in the Collections Facility here but to also revise and create morphological keys for identifying reptiles and amphibians. Morphological taxonomy as a field has not evolved as much as other fields of biology in India. I think it is important to update this field by describing variations in old characters, and investigating new characters; for example, microscopy of stained tissue and skeletal traits for species identification in herpetology. I am also trying to develop keys that will allow even people with no background in the life sciences to identify reptiles and amphibians at least to the Genus level.

Q: What is your vision for the field of herpetology in India?

I hope to see more interest in this field. Amateurs in the field of ecology are often swayed by and attracted to charismatic species such as tigers as prospective study organisms. Not many realise that there are a huge number of equally important small and less charismatic species like amphibians and reptiles to work on. In 2015, we are still struggling to document this diversity. We still don’t know how many amphibians and reptiles are there in the Indian subcontinent. A case in point is the fact that in the past 10 years, more than a 100 new species of amphibians and reptiles have been described from India. However, this area of research often entails unconventional working conditions – for example, geckos are nocturnal and very well camouflaged, which makes capturing them a challenge; and caecilians live predominantly underground and need to be dug up to be studied. I try to convince locals and forest department workers that what they casually dismiss as a ‘chhipkali’ (lizard) is an important part of an area’s ecosystem.

Q: Tell us something interesting while leading a group of novices?

A crowd of 35 to 40 split into groups and went about upturning stones and scraping dead tree trunks to find reptiles. They were told to pack the specimens in plastic bags or plastic boxes. I led the force looking down into rock crevices and raising boulders to have a peep. In the evening, there were rounds of discussions over the catch, apart from slide shows on reptiles with most of the photographs having been taken by him. On the first day, the groups did spot, with me in attendance, a blind snake, brown in colour with its eyes covered with scales, a whitish two-tail spider hard to note on the trunk of a teak tree, a skink, a Brook’s Gecko (Hemidactylus brookii; pal in Marathi) and rock agamid (sarda in Marathi). It was the first time one learnt the difference between geckos and agamids with me going into some interesting basics. With the specimens firmly held in my palm, one could look at them closely. Indian geckos have flat bodies with the skin being transparent and granular. The geckos have vertical pupils and can slither across the ceiling of a room owing to the digits or pads provided with lamelle (plates) on the toes to assist in climbing. The toughest part was when I invited one to handle the specimens. Centuries of secular and non-secular literature have never been kind to reptiles. Every ugly habit has been assigned to them with the added rule of them being venomous when only a few are. In zoology classes, reptiles sit outside classrooms and for most of us fear precedes any rational comprehension. One escaped the physical handling the first day but on the second day one got to hold an agamid and a gecko with some calm. The ones caught by the groups bit hard but there was no venom in them. Roaming the Semadoh range, some saw a black scorpion being released from a matchbox by a forest guard and every one was keen on a repeat performance. It took a stick for the guard to pick up the scorpion as it ran over the stick before being packed into a matchbox. All the specimens were released after study though. Perhaps, the defining moment came at one of the evening talk sessions, when the college crowd expressed their deep desire to see a tiger forgetting the fact of having come to Melghat on a herpetological survey. “Will we be able to see a tiger?” a lady asked. They were not enthused by the Melghat forest or my emotion for snakes. Then, some time back, my friends and I searched an area in the Western Ghats for three days and nights and we were about to give up when we came upon a rare amphibian, a caecilian, styled Gegeneophis danieli.

Q: What will be your concluding note for our readers?

Just do not pick up stones and boulders carelessly as it could be risky. Sometimes reptiles rest under them and could attack when disturbed. Lift the stones with care with the open-end looking away from you to keep the line of attack away from you. Again, when you place the stone back, do not drop it but put it softly in place. Please treat snakes with some compassion. This is called the direct search method. There are numerous theories explaining the walking behaviour of the geckos with none being the last word. In sharp contrast, the agamids have rounded pupils, overlapping scales and no pads. As among other lizards, the shape of the body is indicative of the habit, arboreal forms are flattened laterally and ground-dwelling forms are flattened dorsoventrally. The types of scales on the body and their arrangement are good aids for distinguishing between species. One reason could be the temperature extremes in Satpuda and Melghat. In winters, the temperature on the forest floor is around 7 degrees, and in summer, could shoot up to 45 degrees making it hard for snakes. In the Western Ghats, the temperature ranges around 30 degrees making it easier to watch and catch reptiles. Perhaps, the best time in the Satpuda range is early June or July.

The ‘Hukook of an ‘Adivasi’